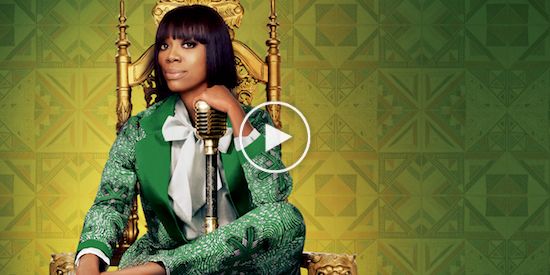 YVONNE ORJI: MOMMA, I MADE IT! | Watch now

In her first HBO comedy special, Nigeria’s Yvonne Orji, better known as Molly from Insecure, has the audience rolling with laughter as she brings her razor-sharp wit and confidence to the stage. Both celebrating and poking fun at her strict, formative Nigerian-American upbringing, Yvonne shares her unique journey from pre-med to comedy, talks about parental pressures to get married, and takes us along to Lagos to meet her family and friends.

Entertainment Weekly calls Momma, I Made It! “an hour of joy”, IndieWire hails it as “a rip-roaring standup special,” and Fast Company says it’s “the laugh the black community needs right now.”

Yvonne also recently earned for her fourth Black Reel nomination in a row as Molly in Insecure. 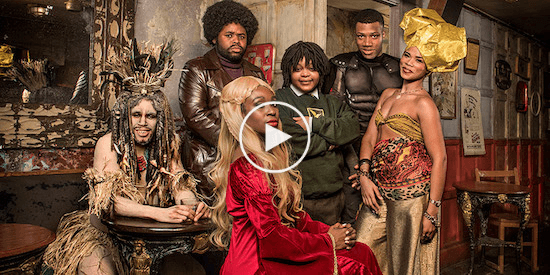 Nigeria’s Gbemisola Ikumelo was recently nominated for a 2020 BAFTA for Best Female Performance in a Comedy for Famalam, a “quickfire, playful comedy rooted in the black British experience,” to quote The Guardian.

Skits like a black Jesus appearing to a white parishioner, or a black superhero expecting to be congratulated by police, or a Slave Lives Matter protest interrupted by someone questioning whether they should rather say ‘all lives matter’ will have you laughing hysterically – not least because the alternative is to cry. There are also regular instalments of Midsomer Motherf*ckin’ Murders, about a black cop in a white man’s world; of aunties who go to war over everything from leftovers to whose grandson is more impressive; and of trailers for Nollywood remakes, from Game of Thrones to Love Island.

Directed by Tom Marshall (Chewing Gum), the BBC series was hailed as “a sublime achievement of satire” by The Independent and “something special” by Refinery29, with writer and producer Akemnji Ndifornyen taking home a 2019 Breakthrough Talent BAFTA and Samson Kayo earning Best Comedy Performance nominations at both the BAFTAs and Royal Television Society Awards. 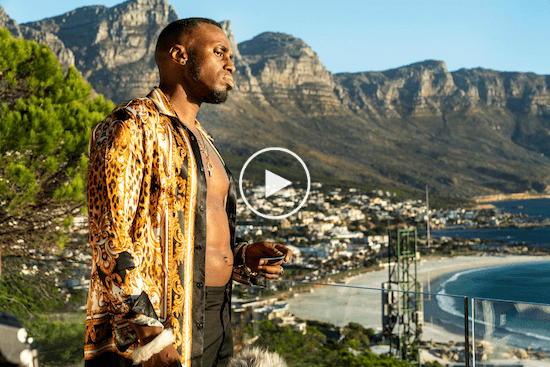 Fresh from outperforming Game of Thrones – and everything else on M-Net last year – Trackers was released internationally by HBO and Cinemax in June.

In America, Meaww raved, “Packed with thrills and chills, Trackers whisks viewers towards a violent conspiracy involving organized crime, state security, and an international terrorist plot… James Gracie and Thapelo Mokoena take centre stage with their amazing performances,” while The New York Times called it “a more polished product than Blood & Water…  more easily entertaining…. James Gracie… can do a lot with silent looks of doubt and reproach.” In Israel, Haaretz called it “the guilty pleasure” of the week, adding, “it comes to life when it places Cape Town front and center.” And in New Zealand, Stuff called it “a high-octane thriller… a good rollicking story.”

Based on Deon Meyer’s bestselling novel, Trackers was a co-production between M-Net, HBO’s sister channel Cinemax and Germany’s ZDF.

“Two years ago, I lost my sister to breast cancer,” says Still Breathing creator and star Tiffany Barbuzano, a two-time Best Actress winner at the SAFTAs, for Sober Companion and 4Play:Sex Tips for Girls. “Writing this show was me getting through that grief in my life.”

The result is an intensely personal M-Net show about life, death and the mess in between, directed by her husband, six-time SAFTA winner Johnny Barbuzano (The River, The Republic), and starring their children, Jamie and Jesse.

Having survived their meddling parents’ attempts to break them up in the 2017 hit movie, Keeping Up with the Kandasamys, Jodi (Mishqah Parthiepal) and Prishen (Madushan Singh) are headed down the aisle at last. It’s going to be the wedding of the year – if they can survive their respective mothers.

Shanthi Naidoo (Maeshni Naicker) has everything planned, down to the smallest detail but, as always, Jennifer Kandasamy (Jailoshini Naidoo) is ready to out-do her. After all, “the Kandasamys don’t do small”…

The most popular South African movie in cinemas last year, and the 17th biggest film overall, this romantic comedy drama is once again directed by Jayan Moodley and was an even bigger hit than its predecessor. 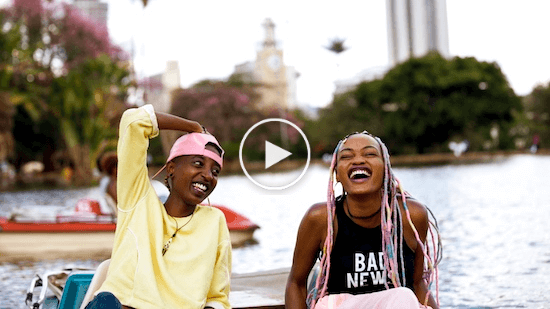 “Good Kenyan girls become good Kenyan wives,” but Kena (Samantha Mugatsia, who won Best Actress at Carthage 2018 and FESPACO 2019 for the role) and Ziki (Sheila Munyiva) long for something more. When love blossoms between them, the two girls are forced to choose between happiness and safety.

Rafiki has a 94% critics rating on Rotten Tomatoes, with Variety calling it “impossible not to celebrate”; RogerEbert.com “a lyrical ode to finding a kindred spirit amidst an uncaring majority”; AV Club “bursting with life”; and Washington Post “a small revelation, not least because it marks the breakthrough of a filmmaker of such exhilarating, cheerfully courageous vision.”

Rafiki was nominated for the Un Certain Regard and Queer Palm Awards at Cannes 2018, as well as a 2020 GLAAD Media Award nomination for Best Limited Release Film. The movie catapulted director Wanuri Kahiu onto Time Magazine’s 100 Next list in 2019 and launched her career internationally. She’s now adapting Octavia Butler’s Wild Seed for Amazon Prime and Ali Benjamin’s The Thing About Jellyfish for Universal, among other projects. 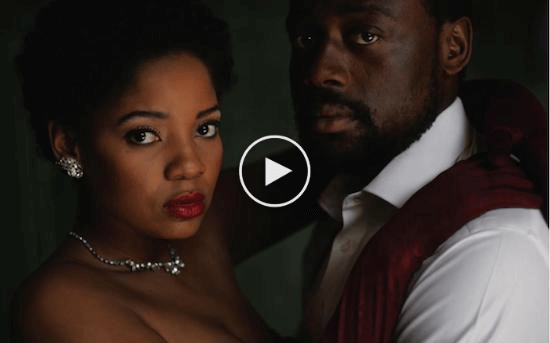 BACK OF THE MOON | Watch now

Sophiatown 1958: On the eve of the forced removals, gang leader Badman (SAFTA nominee Richard Lukunku from Happiness Is a Four-Letter Word) meets the gorgeous Eve Msomi (Moneoa Moshesh from Rhythm City), a torch-singer on the brink of an international career, and finds that fighting to the death becomes a whole lot harder when you have something to live for.

Named Best South African Feature film at the 2019 Durban International Film Festival, Back of the Moon is directed and co-written by Oscar nominee Angus Gibson (Mandela, 28UP South Africa),  produced by The Bomb Shelter (Yizo Yizo), and exec produced by William Kentridge and Anant Singh. The film won a 2020 SAFTA for Costume Design and was nominated for a further three, for Editing, Score, and Production Design.

Frik (Ivan Zimmermann from Egoli), the liberal eldest son of the Malan family, returns to South Africa from the UK to take over the family transport business from his more conservative father (Fleur du Cap winner Albert Maritz from Dwaalster). His wife, Tessa (ATKV-mediaveertjie Best Actress in a Soap winner Nadia Valvekens from Binnelanders), and two teenage children (Greteli Fincham from Blood & Water and Mateo Olivier from Fiela Se Kind) return with him, but each has a struggle of their own.

At this year’s SAFTAs, in the Drama category, the kykNET series was nominated for Best Original Score, Sound Design and Make-up and Hairstyling. 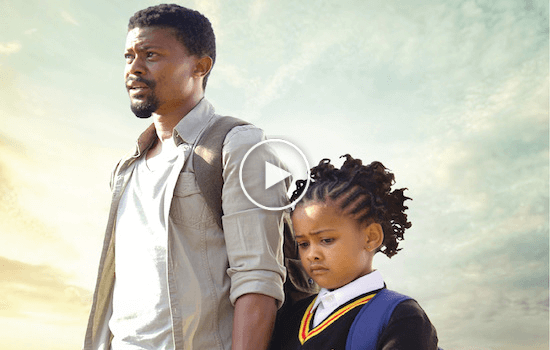 When life, the law, and the woman he once loved separate him from his child, an estranged young father takes matters into his own hands and finds himself in a high-stakes hostage situation. 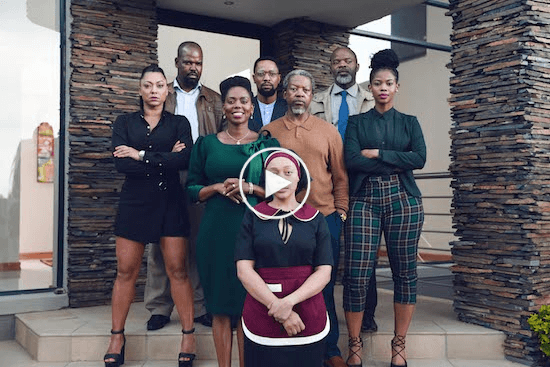 You can’t keep secrets from your housekeeper, which was bad news for the Zwide family in Season 1 of this hit Mzansi Magic series. When nurse June was framed for killing her patient, her daughter Linda (SAFTA nominee Thando Thabethe) left her law career to exonerate her mother – by posing as the Zwide’s housekeeper.

“It’s the best cancer to get,” Dr Pillay tells the bewildered 22-year-old honours student Kittie Claassen (Carla Smith from Binnelanders, in a 2020 ATKV-Mediaveertjies winning performance) as he hands her a diagnosis of Hodgkin’s disease. But Kittie has plans, she has things to do, not the least of which is cracking her journalistic aspirations and enjoying her first burst of young adult freedom with her best friends Mandy (Eve Nthabiseng Rasimeni from Z’bondiwe and Suidooster) and Fanie (Suidoosterfees and Silwerskermfees winning actor/writer Hendrik Nieuwoudt from Fynskrif).

BUT THAT’S NOT ALL, FOLKS

Tags
Feature
Thato Siyabonga Send an email 22 July 2020
Back to top button
Close
We use cookies on our website to give you the most relevant experience by remembering your preferences and repeat visits. By clicking “Accept All”, you consent to the use of ALL the cookies. However, you may visit "Cookie Settings" to provide a controlled consent.
Cookie SettingsAccept All
Manage Privacy