Here are the 6 biggest beefs in the South African music scene so far in 2020.

Of course the music industry is laced with beefs left, right and centre. A month doesn’t pass without us witnessing a blowout between two very notable names. While it is entertaining enough, it sometimes is embarrassing that celebrities can’t handle their problems on the low.

This year already, some of the biggest beefs have gone down and we have watched them happen with a pen in hand. From AKA’s crazy one-sided tweet war with Cassper Nyovest, to J Molley and The Big Hash’s battle of bars, we have seen enough to last a life time. We are sure there’s more to come. Join us as we recap how they all went down.

1. AKA Vs Cassper Nyovest

The year hasn’t really started if an AKA and Cassper Nyovest war hasn’t gone down. Both rappers command two of the biggest fanbases in the country which makes their war a really huge deal. Well, we got a taste of it some weeks back and it was crazy.

AKA had woken up one morning with an axe to grind. The “Fela In Versace” rapper took to Twitter and unleashed his fury on an absent Mufasa who was nowhere to be seen. This was all in an effort to get him to agree to a televised boxing match which would feature both rappers for millions of Rand.

Somehow, Cassper’s parents were dragged into the mix with AKA calling his a deadbeat and his mother a “poes”. Mufasa didn’t really retaliate like we expected which was quite surprising. Did we mention he also called Cassper a Moffie?

This was certainly one of the most unexpected feuds of the year, and we are still not sure how it ended. DJ Maphorisa was obviously out looking for trouble because he threw the first punch. The “Soweto Baby” hit maker thought it wise to out some of the Mzansi hit makers who didn’t own their music catalogue like him and bestie, Kabza.

He didn’t really anticipate what followed because one of the listed names (Prince Kaybee) would not have it. We hear he pulled over to the road side just to pull stats to prove he sold more records than the Amapiano sailor.

Cav iam only seeing u on shazam ko top 10🤪

@PrinceKaybee_SA
Feb 26
Lol Rratuku cumon papa, do those cloths u wear on ur head burn ur brain to this extent? LETS GO…,

In the last 5years I’m the only artist with 3 singles to go DIAMOND and 7 singles to go PLATINUM in ONE ALBUM, LET ME REPEAT, IN ONE ALBUM!!! I’m not done, READ THE TRHEAD😊

We witnessed both disc jockeys go back and forth trying to prove who owned what just to outdo the other. In the end, it just died down.

Like two of the feuds on this list, it hasn’t been too long this went down. Last month, DJ Speedsta raised a lot of dust when he took shots at Nasty C. He stated in tweets that the Coolest Kid acts like he’s better than some people in the SA music industry. He also alleged that Nasty’s song, Bamm Bamm actually belonged to him.

Not letting it slide, Nasty replied him telling the true story about the song. According to him, he (Nasty) made the beat, laid verses on it, and sent to Speedsta. He, however took it back when the radio man slept on it.

Hawu @speedstabro CAP 🤣🤣🤣 CAP CAP CAP. FIRST OF ALL NIGGA, I MADE THE BEAT, DROPPED HOOK & VERSE AND SENT IT TO YOU, THEN YOU SLEPT ON IT, SO ME & PIERRE DECIDED TO SNATCH IT BACK AND DROP IT.. YOU DIDNT GIVE ME NO SONG BRO 🤣🤣🤣 WHYYYY pic.twitter.com/fhCUpWNluh

He also stated that the “No Stress” hit maker was jealous of his success in the industry, which was the reason why he had called him proud. We doubt that we’ve seen the end of this one.

We haven’t really seen the end of this feud because it seems to be happening every day lately. Everyone knows Emtee is yet to recover from how bad Ambitiouz Entertainment treated him. The rapper has made it his mission to get back everything that was taken from him by them.

Initially, the label kept mum everytime the “Waves” rapper called them out on social media asking for his awards back. However, that didn’t last for too long because they began mocking him later on. At some point, they told the rapper that everytime he mentioned them, their followers increased.

You realize that every time you mention @Ambitiouz_Ent our following numbers get blessed right #PriceToPay pic.twitter.com/hkYve1rzPh

Their feud also got a reaction from a few celebs but not Saudi who wasn’t bothered at all. We hear Emtee has taken the label to court and is asking for royalties dating back to 2015, and of course, his awards back.

5. J Molley Vs The Big Hash

This was definitely one of the most unexpected and shortest feuds of the year. Out of nowhere, The Big Hash took to Twitter to challenge J Molley to a battle of bars. Mind you, this was after his sub at him in a song didn’t really get much talk.

Moving on, Molley accepted the challenge and we saw both rappers unleash scathing diss songs at each other. It didn’t really ended well because their teams got involved and the drama took an entirely new direction. We hear some lies were told but both rappers ended up dropping out of the feud. 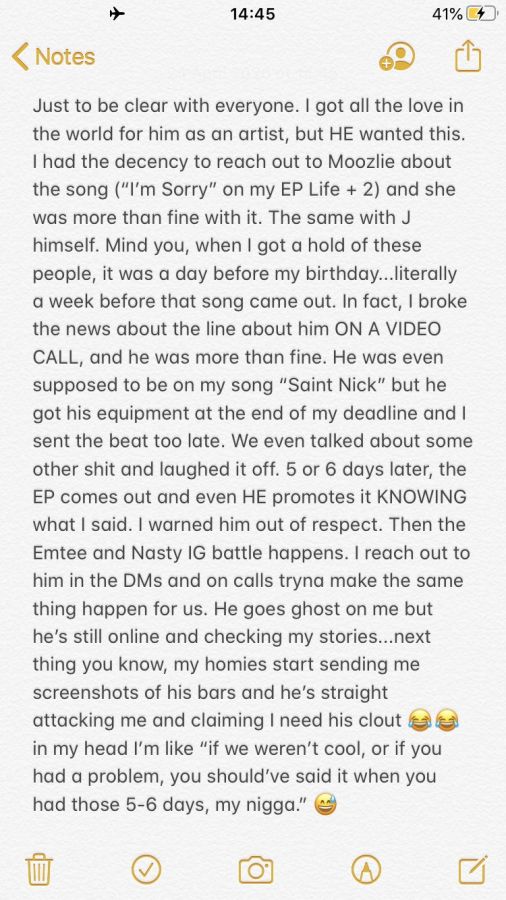 Everyone knows Emtee’s pals a.k.a Ruff aren’t really moved by Cassper’s charm. They have managed not to hide their thoughts even on social media. This cost Mufasa a collab with The Hustla and we doubt that he’s over that.

After Emtee’s IG Live battle with Nasty C, Mufasa sort of made it about him. He had tweeted that no one could go against him prompting a reply from Emtee who said he should’ve congratulated them instead of making it about himself.

Replying, Cassper called him his “laatie” (little boy), which made Emtee furious because he didn’t treat him like he does Nasty. Well, that was true because Nasty also reacted to the tweet by didn’t get called a boy. The two haven’t been on speaking terms ever since.

Tags
AKA Cassper Nyovest Dj Maphorisa Dj Speedsta Emtee Feature J Molley Nasty C Prince Kaybee The Big Hash
John Jabulani Send an email 15 May 2020
Back to top button
Close
We use cookies on our website to give you the most relevant experience by remembering your preferences and repeat visits. By clicking “Accept All”, you consent to the use of ALL the cookies. However, you may visit "Cookie Settings" to provide a controlled consent.
Cookie SettingsAccept All
Manage Privacy