Around the world, governments and institutions take steps to ensure they are serving the people or customers the way they should. Some of these steps are set in principles for everyone to access. In South Africa, we have the Batho Pele principles.

Translated from the Zulu, Sesotho and similar languages, “Batho Pele” means “people first.” These principles detail the cardinal points by governments and other institutions to address the needs and grievances of the people while also ensuring they don’t lose their dignity in the process.

Batho Pele has 8 principles. Since the principles were coined, though, some institutions have added to them. For instance, KwaZulu-Natal has added two new principles to the original list. They are: 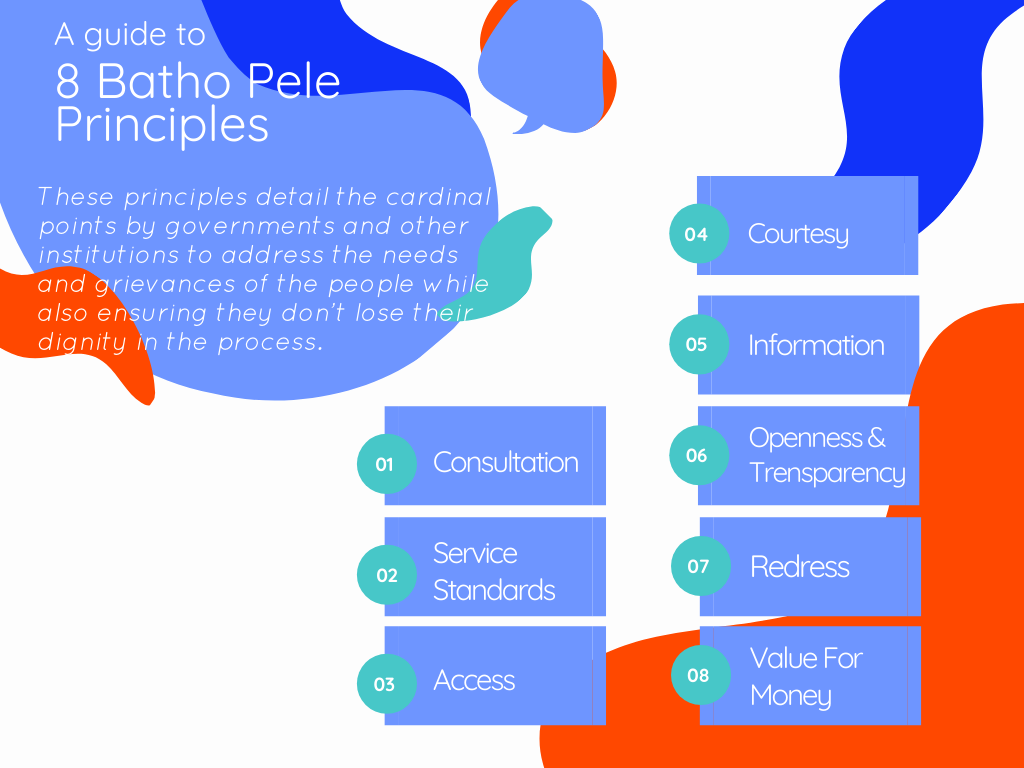 This part of the principles has been described as key to providing better service because institutions can only understand what the people actually need by consulting with them.

Put simply, this part of the principles states that people should always be consulted in matters that affect them.

Without standards, anything goes, and when anything goes, quality is usually the first casualty. And without quality, service will never be worth the name.

Also, when service standards are set, people instantly realize what they should expect from the government and those governing them. Without this, expectations might be skewed, and the government might have a hard time clarifying things beyond its purview.

This part of the principles states that citizens are entitled to redress in instances of service failure and when standards are not met. In that case, it is incumbent on civil servants to not only offer an apology to citizens but also find a way to resolve their complaints.

It is the right of citizens to not only expect redress but to get the same. But, of course, the reality on the ground might be different from what this part of the principle states. Not every public servant is prepared to listen in instances of people seeking redress.

Access is like the statue of justice. It is blind and doesn’t discriminate. But, of course, the reality on the ground is that access is sometimes very selective, contrary to what is stated in the part of the eight principles.

This part of the principles affirms the old truth that public servants are actually employed by the people and should treat the same people well and not like discarded rags.

This part of the principles states that people are entitled to complete information in matters affecting them, and they can request the same information from those in authority and receive the same.

Citizens have the right to full disclosure. But, also, the information being shared should be clear so that everyone understands them. And in cases where information isn’t clear, the same should be explained to the citizens.

Transparency has been described as one of the keys to a good government, so it is not surprising that it made the Batho Pele principles list. This part states that public service delivery must be transparent.

Unfortunately, in most cases, the poor and ignorant are rarely treated with transparency. Instead, they’re denied services they should have access to for free or else charged for it.

Also, it is incumbent on public servants, for instance, to locate areas of wastage in public expenditure and either plug them or inform those who are in positions to do so. That way, resources are conserved and used in areas where they might be needed.

Principles, like those enunciated to put the people first, are welcome and desirable. But as is most often the case, they are what they are and rarely implemented – or at most not followed.

That notwithstanding, the eight Batho Pele principles are vital. And those who want to add to the list are welcome to do so – not forgetting to make sure they’re all implemented, of course.

Tags
Batho Pele Principles
John Israel A Send an email 9 September 2021
Back to top button
Close
We use cookies on our website to give you the most relevant experience by remembering your preferences and repeat visits. By clicking “Accept All”, you consent to the use of ALL the cookies. However, you may visit "Cookie Settings" to provide a controlled consent.
Cookie SettingsAccept All
Manage Privacy