As a central part of our lives, music provides a daily soundtrack as it motivates, inspires, comforts, and gives us a voice at times when we need the world to listen.  In 2020, we turned to music in record levels, listening to and discovering more music than ever before. Today, Apple Music reveals the biggest songs and albums of the year with its annual Apple Music Top 100 charts. For the first time, Apple Music will share the Top 100 2020: Most-Read Lyrics chart, and the first Shazamed locations of the Top 25 Songs. These global charts highlight and celebrate another incredible year in music, and together they provide a truly unique and global perspective on the year’s biggest music.

Charts highlights and Top 25 Songs (including first Shazamed locations), Albums, Lyrics and Shazamed Songs of 2020 below.

Biggest Songs of 2020
It was clear from the day that Roddy Ricch’s debut studio album Please Excuse Me For Being Anti-Social was released, that “The Box” would be the standout track. Garnering 13.7 million plays worldwide in its debut week, “The Box” was an immediate standout on Apple Music’s Rap Life playlist as well as the Apple Music Top 100 charts. By the second week of January, the song was surpassing 30 million weekly plays globally in addition to being Shazamed 1 million times in the first six weeks. By the end of January, the song had already reached #1 on the Apple Music Top 100 charts in 34 countries, eventually peaking at the top in 37 territories by mid-February, in addition to topping the Apple Music Top 100 Global chart. From its very first Shazam in Minnesota, the song has now been Shazamed over 6.7 million times globally. Additionally, fans have spent over 246,000 hours viewing the lyrics of the song, the 4th most time spent with a song’s lyrics on Apple Music, showing an even deeper level of engagement.

While “Blinding Lights” had the second most streams this year, it actually had the most listeners, which is a testament to its global appeal. Having reached the top 5 on the Apple Music Top 100 charts in 92 countries, including #1 in 62 countries, the song was one of the world’s most listened to tracks of the year. Also, from its very first Shazam in Paris, France it went on to be Shazamed 17.5 million times worldwide, the third highest total for any song this year. And listeners were engaged with the lyrics as well, spending 235,000 hours reading the lyrics worldwide, which was good for 6th highest on our year-end Top 100 2020: Most-Read Lyrics chart.

When we consider artists and songs that came out of nowhere to become global breakout hits, our first thought this year would be Tones And I with the song “Dance Monkey”. The song was the third most streamed song in 2020. The very first time the song was Shazamed in Dusseldorf, Germany was just the beginning of music fans asking “what is that song?” – a question that was asked of Shazam an incredible 24.6 million times over the year.  Rewriting Shazam’s record books, the song is the most Shazamed track not only this year, but also of all time. The song started to emerge in September 2019, and remained in the top 40 on the Apple Music Global Daily Top 100 chart a full year later, currently reigning as the second longest consecutive weeks streak on the chart.

Biggest Albums of 2020
Led by the year’s biggest song, Roddy Ricch’s album Please Excuse Me For Being Antisocial is the most streamed album of the year.  While “The Box” was the most streamed song, fans were exploring all of the album’s hits, with “High Fashion”, “Start Wit Me” and “Bacc Seat” all appearing on our Top 100 Songs of 2020: Global chart. “The Box” and “High Fashion” also appear on the Top 100 2020: Most-Read Lyrics chart as fans engage with Roddy’s message.

Lil Baby’s album My Turn was the second most streamed album this year, with six of the albums songs reaching the year-end top 100, led by “Whoa” at #9. Other standout tracks include “Sum 2 Prove”, “We Paid”, “Emotionally Scarred”, “Grace” and “Commercial”, showing the tremendous depth of the album, as well as the engagement of his fans. Lil Baby also placed 5 songs on the Top 100 2020: Most-Read Lyrics chart, including 4 from My Turn, as well as the socially important hit “The Bigger Picture”.

Music Discovery Goes Global
Thinking about global music discovery, our thoughts jump to the music scenes in major markets. Places like Tokyo, Berlin, Paris, London, New York, and Los Angeles are all where cutting edge music is being discovered. But based on this year’s biggest hits, we should also be thinking about Cleveland, Ohio, Almaty, Kazakhstan, and Adana, Turkey. These not-so-major music markets are the location of the earliest Shazams for some of this year’s most streamed songs.

Even when looking at artists with multiple hits, their first Shazams are coming from all over the world. The first Shazam for Billie Eilish’s “everything I wanted” came from Moscow, but her song “bad guy”, was first Shazamed in Shenzhen, China, and “when the party’s over” was first tagged in the state of Guanajuato, Mexico. Drake had four songs in the year-end top 100, with his first Shazams coming from the Dominican Republic, Israel, France and the United States. Post Malone also had four of the 100 most streamed songs in 2020, with first Shazam discovery happening in Croatia, Italy, the US, and Mexico.

We can’t forget the world’s second largest music market, Japan. As Apple Music’s fastest growing territory among our top markets, Japan is seeing remarkable growth of music within its borders and music fans in Tokyo were first to Shazam “I LOVE…” by Official HIGE DANdism and “夜に駆ける” (Yoru Ni Kakeru) by YOASOBI. In fact, “夜に駆ける” (Yoru Ni Kakeru) was the second most Shazamed song in Japan this year, trailing only “Dance Monkey”. The song has been streamed over 100 million times on Apple Music and comes in as the #69 most streamed song on our year-end chart. But, most impressively, is the engagement that YOASOBI’s fans have with the song’s lyrics, making it #3  on the Top 100 2020: Most-Read Lyrics chart with 260,000 hours of lyric views.

Let’s not at all diminish the importance of some of the world’s major music markets. London was the first to Shazam “Say So” by Doja Cat. Paris was first on five of the songs in the top 100, including songs by The Weeknd, Maroon 5, Diplo, Don Toliver, and Drake. New York also led the way for five songs, first Shazaming hits by Harry Styles, The Weeknd, Camilia Cabello and Shawn Mendes, Pop Smoke, and Young Thug & Chris Brown. But for every major music market, we find small markets with engaged music fans that are Shazaming songs before anyone else, proving that music discovery can come from anywhere.

2020 saw Master KG hit the top of the Global Shazam charts with his smash hit “Jerusalema” and Amapiano newcomers Mapara A Jazz have a Top 50 Global Shazam single with their debut single “John Vuli Gate”. In South Africa, the most Shazamed song of 2020 was Elaine’s “You’re The One” and most Shazamed Artist of the Year was Amapiano king Kabza de Small. 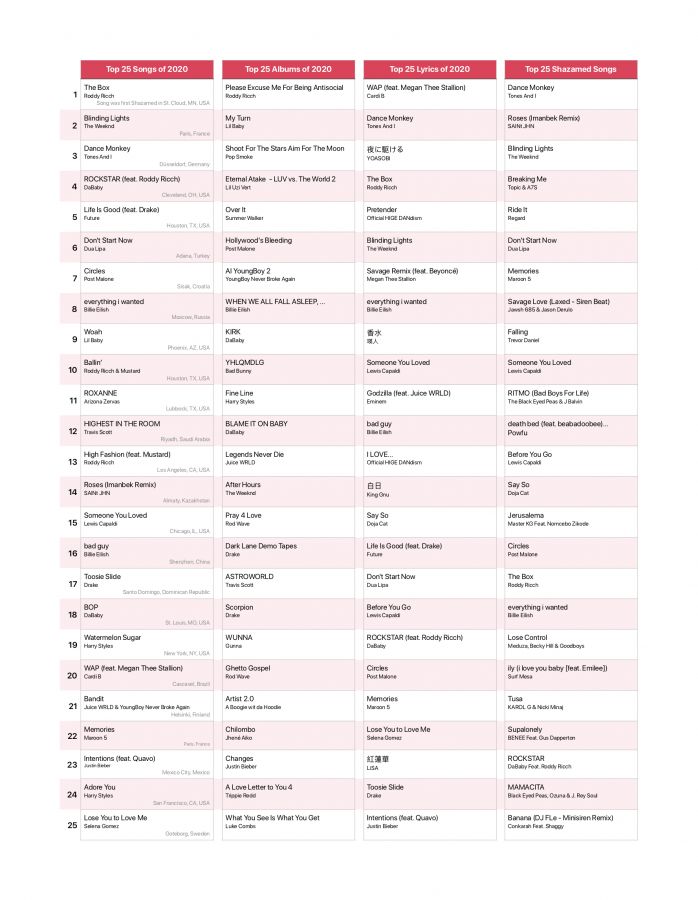 Tags
Apple Music Feature
Thato Siyabonga Send an email 3 December 2020
Back to top button
Close
We use cookies on our website to give you the most relevant experience by remembering your preferences and repeat visits. By clicking “Accept All”, you consent to the use of ALL the cookies. However, you may visit "Cookie Settings" to provide a controlled consent.
Cookie SettingsAccept All
Manage Privacy