Man’s quest for musical expression is amply documented and dates back to ancient times. The desire for new ways of creating or rendering music has led to several inventions, ingenious and not quite so.

One of such inventions for musical expression is the Impempe whistle. Impempe is a Zulu word which Bryant explained, back in 1905, as “tail-spine or quill of a porcupine by which it produces a rattling sound; quill or barrel, i.e. the bottom end, empty of pith, of any feather.”

Impempe Whistle is an instrument of ancient origin having found a home in not only Celtic traditions, but Asian, African and American as well. It is known by many names, the most common ones being the Irish Whistle, Penny Whistle, Flageolet, Tin whistle and of course the Zulu name Impempe.

The kids from northern Transvaal would cut the whistle from reeds, which were readily available and also easy to cut to shape, using a flint or knife. Modern Impempe whistles are, however, made of aluminum. They have a brushed look. Impempe whistles come in fairly large and rounded, evenly spaced tone holes for moisture control and condensation.

He started the company back in 2003 with a few prototypes. The company then evolved into manufacturer of professional Impempe whistles that clients vouch for across the world, from Germany to the United States.

As a matter of fact, the official Impempe Whistles Facebook page was last updated in 2017 – exactly three years ago; the company’s website on which you are reading this now displayed just the company name and no information about the company or its products before now.

There has not been any official reason made available to the public as to why the company has stopped and we are not able to provide that information but what we know for sure is that there are some demand for iMpempe Whistles!. One curious and interested individual wrote on Reddit: 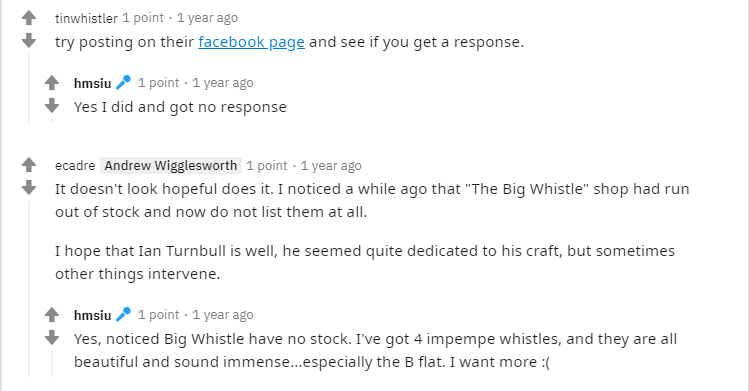 Impempe Whistles was getting very popular in South Africa some years ago, thanks to the manufacturer that made it readily available to the public in a form that is more advanced.

The modern Impempe Whistles made by Ian Turnbull are handcrafted Aluminium Whistles made of Aluminium with a curved windway, which helps deal with moisture and condensation. They come with a tuning slide which needs a touch of tuning slide grease or equivalent to help with a smooth slide and prevent from siezing.

The whistles are tuned with close attention to balance across the octaves as well as a comfortable reach for the fingers. Each whistle is tested and played before being shipped and ensured that it is in good order. After extensive development, the shaped windway brought about a change in the design with better intonation and focus but not losing the traditional Impempe sound.

Each one being handmade means that there are no two whistles that are exactly the same, however the quality and final product are never compromised.

Whistles were made into a variety of keys, and have whistles both Low and high, with a slightly different approach to both. The whistle is a great starting point for musical instruments and a great alternative to the traditional recorder. According to the makers, once you have mastered the whistle, the possibilities are endless.

It is a genuine musical instrument that has tugged many heart strings. Think of the Titanic movie theme, Braveheart etc. Come to think of it how about South Africa’s own Mango Groove, Big Voice Jack, and Spokes Mashiane. The whistle has a rich heritage in South Africa with the Kwela genre having brought a special happy, catchy vibe to the world but filled with history and destiny.

The company that made the whistle was situated in Hilton in the beautiful midlands of KwaZulu-Natal in South Africa. The misty mornings in the lush green foothills give one a sense of the Scottish landscape and the call of the fish eagle confirms the african-ness, bringing a blend of Celtic and African traditions which are epitomized in the Impempe whistle.

Of course, as stated at the outset, the use of whistle in music dates back to earliest times. In South Africa, even though it’s use has declined over time. Artistes are still exploring the whistle bend in music but they are pretty few.

Renei Solana is one such artiste. The songstress snapped the attention of South Africans recently when a video of her dancing to an Amapiano song and blowing an Impempe whistle went viral. She became a household name over night.

Given the charm of her performance, she was dubbed Whistle Girl, a name that has since stuck. Also, the songstress is now in demand as a feature artiste. She had linked up with Thelebe for the (impempe) whistle version of his song “Jebson.”

Her performance of same Thebelebe’s song has also been recorded as “Impempe,” which you can check out below.

Perhaps because Amapiano is the genre that drew the attention of many to the charms of the Impempe whistles recently – when Renei Solana performed – an amapiano whistle challenge had erupted in Mzansi, with many participating.

Although Whistle Girl appears to have given Impempe whistles robust resonance, she wasn’t the first to use the whistle in mainstream music. Notable musos had had Impempe whistle performances but didn’t quite buzz like the Girl.

For instance, back in 2011, exactly nine years ago, notable disc jockey and producer  DJ Soul T had released an Impempe Whistle song in collaboration with DJ Cleo and The Teddy Bears.

The video of the song, which is available on YouTube, has been viewed over 710k times. You can check it out below.

The frenzy over impempe whistles beginning to grow again. Perhaps over time it might spawn a subgenre in Amapiano.

Thato Siyabonga Send an email 30 May 2020
Back to top button
Close
We use cookies on our website to give you the most relevant experience by remembering your preferences and repeat visits. By clicking “Accept All”, you consent to the use of ALL the cookies. However, you may visit "Cookie Settings" to provide a controlled consent.
Cookie SettingsAccept All
Manage Privacy