Right now, though, Mabala Noise is not making any noise – except perhaps on Twitter, where it had been tossing memes with rival Ambitiouz Entertainment. If the artistes aren’t singing and the speakers aren’t buzzing, we should as well occupy the denizens of Twitter with meme overdrive. That appears to be the mantra of Mabala Noise right now. What’s there to lose, man?

On Instagram, the record label’s last post dates back 13 weeks ago. The post announced the postponement of The Golden West Gospel Picnic until further notice. The fear of COVID-19 was the principal reason for the postponement.

The trajectory of Mabala Noise is something that will probably interest music scholars someday. The record label that had captured the attention of many years back with the announcement of about a dozen major signings, is barely head of these days.

Are there Artistes currently signed to Mabala Noise?

Reggie Nkabinde, one of the owners of the record label, had divested thanks to the lure of politics. And the artiste began leaving…

For a record label that was pompous in its noisemaking years back, Mabala Noise is so noiseless right now as to throw any keen follower under the wheel of introspection. Which artistes are still signed to the label? What have they released?

Like y’all, we are equally lost in the maws curiosity. The denizens of the house of Mabala Noise have so vanished that we are having trouble finding a speck of dust from the footprint of any artiste there. In fact the last (serious) news item about the record label by any reliable media outfit was published a year ago (2019).

Funny enough, Mabala Noise is clueless about the url of its website. On its Twitter channel, it gives the url as mabalanoise.co, a site the record label is not in control of and has no affiliation to. 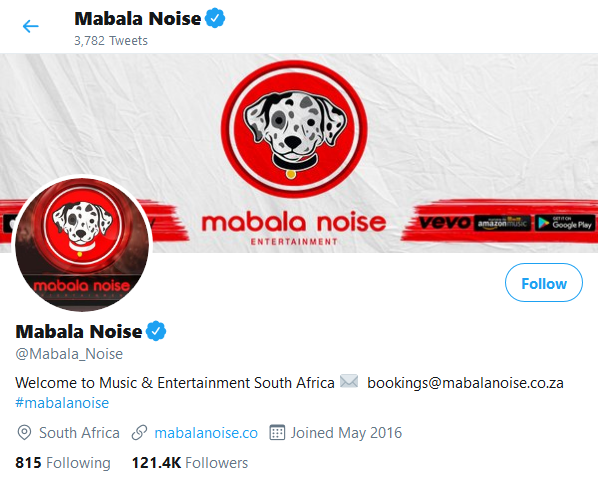 One had to think things out and try the url mabalanoise.co.za and fiam! One had the official website of the record label.

Your acclamation of relief and victory is short-lived, as you find out almost immediately that the site is “under construction,” with no information whatsoever when it will be available again

Your ambitions are legit, man. But you may have to fold that ambition in your pocket right now and either wait for the record label to stutter back to the land of the living, or you take your ambitions to the altar of another record label.

No big deal. Or, if you if you nurse a singular devotion to the record label and would want to be there whatever the situation – “we die here” things – you can reach out privately to former executives of the record label, people who once called the shots at the record label.

Assuredly, DJ Bongz and Reggie Nkabinde would make that list.