(DJ Maphorisa and Kabza De Small) have created something wholly unique on their collaborative album  with with Afro-pop maverick and entrepreneur, Tresor called Rumble In The Jungle – 14-track anthemic amapiano experience that is available to stream on Apple Music today.

As creators of some of the biggest South African hits of the last 10 years, DJ Maphorisa (Uhuru’s “Y-Tjukutja”, Mafikizolo’s “Khona” and gqom anthems “Oncamnce” and “Midnight Starring”) and Kabza De Small (“Sponono”, “iLog Drum”) are no strangers to pushing the boundaries of African music to pioneer a future wave. 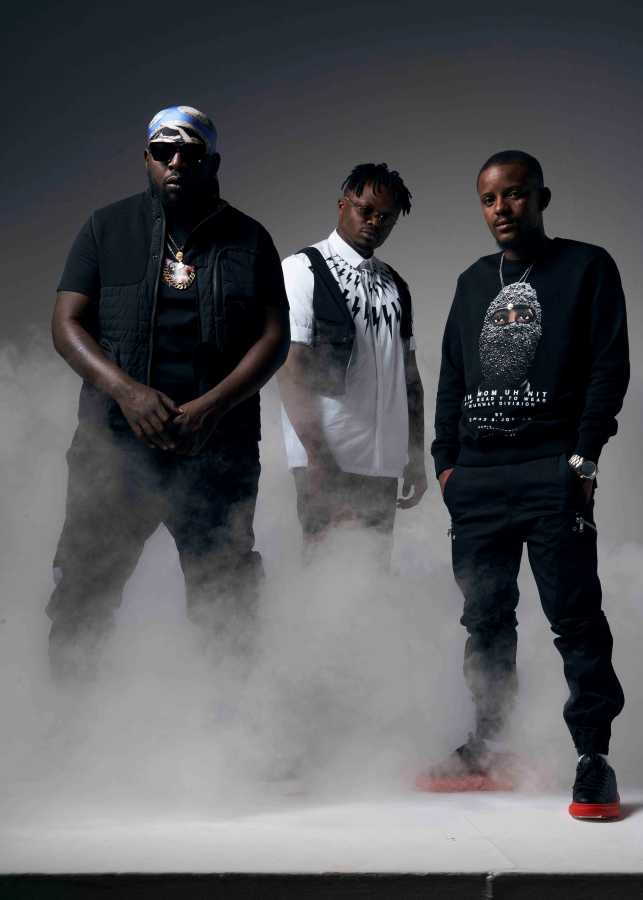 Renowned for his distinct sound, Tresor is a multi-platinum selling artist and three-time award winner for Best Pop Album at the SAMAs, and his distinct vocal timbre amplified the first two successful singles off Rumble In The Jungle, “Funu” and “Fola Sade”.

This boundary breaking album is also accompanied by striking visuals – from its energetic, fashion-forward music videos, to the one-of-a-kind two-headed sculpture created for the album’s artwork and facilitated by artist services company Platoon.

Designed by visual artist and sculptor, Hedi Xandt (who had previously worked with Beyoncé on The Lion King: The Gift Soundtrack) he created a modern artifact depicting The Scorpion Kings and Tresor as the legendary trinity, Memnon.

Memnon was not only an African King, equal in strength to Achilles, whom he battled before the gates of Troy, but also the true Identity of the Egyptian Pharaoh Amenophis and the father of the Norse God of Thunder, Thor.

“This particular album is special for me because it represents a bold statement of pride in the diversity of our culture as Africans, embracing the rich musical landscape of our home. We went back to the source and tapped into sounds from all over the continent for this album,” Tresor explains.

“Rumble In The Jungle is a sonic roar, a cultural bridge breaking all barriers and bringing our people together through music. We are fusing the incredible South African rhythm of Amapiano with Swahili, French, Congolese sounds and melodies, as well as west African chants with Afrobeats elements. It’s boldly authentic, unapologetic, energetic and raw.”

From the hard-hitting hook of opener “Stimela”, to the traditionally-rooted melody in “Soro”, to the groove-inducing Afro-house vibes of “Dust In The Wind” featuring Beatenberg, Rumble In The Jungle is a glorious showcase of why the eyes of the world are currently on Africa and her creative exploits.

From Cape Town to Cairo, Nairobi to New York, Accra to Amsterdam and beyond, Rumble In The Jungle is testament to the power of African music and how far it’s come in its evolution, with something for everyone to enjoy.

“This album is a gift to Africa. We are bringing the amapiano sound to the continent. We loved working on it and are excited for Africa and the world to hear it,” concluded DJ Maphorisa.

DJ Maphorisa has been the man behind South Africa’s favourite club bangers for just under a decade, with his main aim to change the game positively, producing hits like Uhuru’s “Y-Tjukutja” and Mafikizolo’s “Khona” both in 2013, and going on to release the lauded gqom anthems “Oncamnce” and “Midnight Starring”. He also collaborated with American supergroup, Major Lazer, on the 2017 African anthem, “Particula” which topped the charts across 17 countries on the continent.

Kabza De Small is frequently referred to as the King of amapiano and with good reason. His tracks “Sponono” and “iLog Drum” were instrumental in popularizing the genre, and his debut album ‘I Am The King of Amapiano: Sweet & Dust’ (2019), became the first album on Apple Music to have all 26 tracks in the Top 30 of the Top 100 Music Chart.

TRESOR has comfortably cemented his position in the African Pop genre since the release of his award-winning breakout album, VII in 2015. He has gone on to add to his string of accolades, including two SAMAs for Best Male Artist and Album of the Year for ‘The Beautiful Madness’ (2017) and a Southern African Afrimma Award for Best Male Artist in 2018.

Tags
Dj Maphorisa Kabza de Small Scorpion Kings Tresor
Thato Siyabonga Send an email 9 April 2021
Back to top button
Close
We use cookies on our website to give you the most relevant experience by remembering your preferences and repeat visits. By clicking “Accept All”, you consent to the use of ALL the cookies. However, you may visit "Cookie Settings" to provide a controlled consent.
Cookie SettingsAccept All
Manage Privacy