Thobeka Majozi. She is the young lady who gives birth “Any Minute Now (AMN)” – or so her boyfriend Cassper Nyovest has been telling the world.

How Old Is Thobeka Majozi:

Born 2 October 1992 in Mahikeng, Thobeka Majozi is 29 years old and she is from a rich family. This perhaps explains why she calls herself your favourite rich aunt.

Her mother Ntombimpela Majozi runs several businesses, including hotels. She looks so young you would easily have mistaken her for the elder sister of Thobeka Majozi.

Although her family is rich Thobeka Majozi wouldn’t use that as excuse not to secure an education. She graduated from the Durban University of Technology in 2016. She is said to have pursued advanced studies thereafter, but it isn’t for her education that she is famous. It is for her Instagram content.

She currently has 162k followers on the platform.

Her first picture on the platform was said to have been posted back in 2015. She was fairly consistent in her posts, and her following grew massively in the following years.

Following her pregnancy, which Cassper Nyovest announced to the world in a tweet that has since been retweeted and shared tens of thousands of times, she had literally vanished from view. Her Instagram page is now fallow. Previous Instagram pictures and videos have been archived, leaving only the cover art of Cassper Nyovest’s “Any Minute Now (AMN)” album.

Clearly, her focus now is about giving birth and taking care of her son. Cassper Nyovest is similarly focused, having stopped punishing gym rounds. He recently confessed he is eating like a pig and is gaining weight.

By the way, before embracing Cassper Nyovest of the “BongiNkosi” fame, Thobeka Majozi had dated other celebs but was decidedly discreet about her relationships. For instance, she reportedly dated former Kaizer Chiefs defender Siyanda Zulu.

But the pair couldn’t hide it for too long. On her birthday in 2019, Cassper Nyovest had shared a short video of him preparing to take out his Bentley. He captioned the video “roadtrip with her.”

Only later did fans realize it wasn’t the car he was speaking of but Thobeka Majozi: She had shared a photo of herself sitting on the car, which was parked along the car. Fans were wowed by the game the pair played. 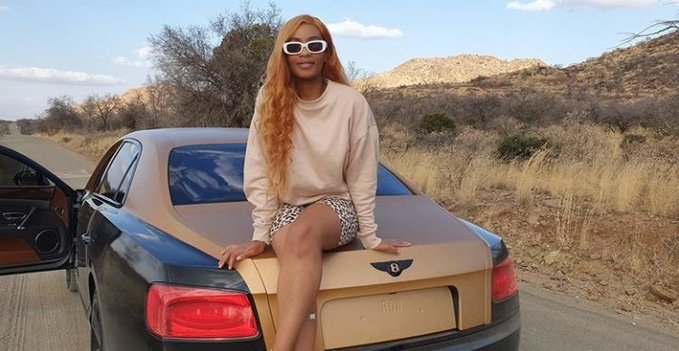 Well, it is no longer a game. Cassper has taken responsibility for her pregnancy and, according to him, he can’t wait to be a father. In case you missed it, back in 2018, rumours had swirled across Mzansi that the couple had twins. But neither of them confirmed it. So it might be what it is: rumour.

The day Thobeka Majozi will give birth has not been made public, but then since Cassper Nyovest will be releasing “Any minute Now (AMN)” album on 11 September, the belief is that it is also the date she would give birth. She gives birth in the early hours of the day, and by afternoon drops…

Although Thobeka Majozi is active on Instagram, she has a simple warning for her fans. She loudly disclaims a Twitter and Facebook presence. So, if you in touch with someone who claims to be her on those social networks, you’re most probably dealing with a scammer. Stay clear!  More than that, alert her and report the account to the authorities.

Are there some facts about her that we left out? You’re welcome to join the conversation by dropping them in the comment section below.

Tags
Feature Thobeka Majozi
John Israel A Send an email 1 September 2020
Back to top button
Close
We use cookies on our website to give you the most relevant experience by remembering your preferences and repeat visits. By clicking “Accept All”, you consent to the use of ALL the cookies. However, you may visit "Cookie Settings" to provide a controlled consent.
Cookie SettingsAccept All
Manage Privacy