He has been around for about decades – and the world knew him as the son of a multibillionaire. Of course, given the circumstance of his birth, the interest in his person was pretty high. But that interest in Xavier Musk skyrocketed recently after he applied to legally change his sex and name.

Who, exactly, is this teenager, and why would he want to ditch a name that instantly opens doors and transition from male to female? The details of this remarkable transition might not be out there, but we’ll give you want we know. So. Hop along.

Xavier belongs to the durst set of Twin Elon Musk had. His brother in Griffin. Before the two were born, their mother, the Canadian author Justine Wilson, had a daughter named Nevada Musk. She died at 10 weeks old from sudden infant death syndrome.

Justine and Elon decided to try for another child. Xavier and his brother Griffin were conceived via IVF in 2004. Two years later, the couple would also welcome triplets, Kai, Saxon and Damian, through IVF.

Like his brother Griffin, Xavier maintained a low profile. He only burst into the consciousness of many when he reached the age of consent and applied for a gender and name change. 1 billion dollars? What’s That? Go away, dad! Elon Musk might be the wealthiest man in the world at the time of writing, but Xavier is uninterested in his wealth or anything that concerns the billionaire at this point. He wants his way – out.

In his filing for a name change, Xavier, now Vivian Jenna Wilson, noted that he “no longer live[s] with or wish[s] to be related to my biological father in any way, shape or form.” Indeed a devastating blow any father can experience – this cold and public repudiation.

It’s unclear why she should totally repudiate any link to her father. However, some commentators claimed the Tesla boss had made some homophobic tweets in the past. Musk, however, insists he’s a trans supporter and that Tesla is one of the best places to work for trans. 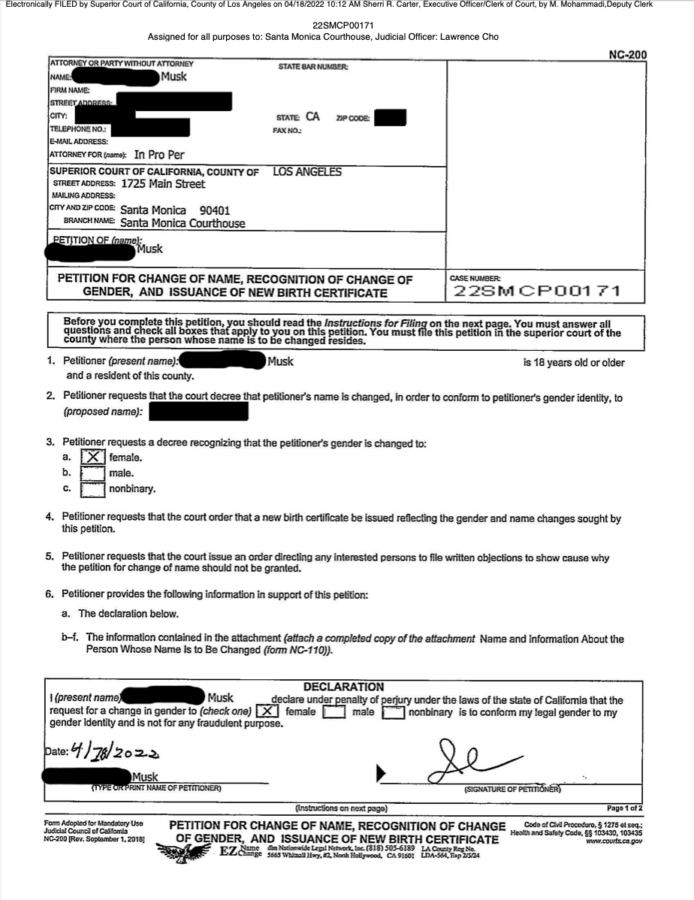 Still, his critics point to his support of the Republicans, who plan to limit transgender rights. And Florida Governor Ron DeSantis, who’s infamous for his “Don’t Say Gay” bill.

There’s obviously a rift between Musk and his son Xavier.

Xavier Has A Closer Bond With His Mother

Justine Wilson, the author of Blood Angel and other books, has remained mainly out of the limelight, but she shares a deeper bond with her son Xavier. So it was easy for him to change his name and take on her surname Wilson.

Elon Never Spoke Much About Xavier

Even before Xavier went public about being transgender and opting for a name change, his father never spoke much about him and the other children he had with Justine. In interviews years back, he would merely state that he had quality time with his boys. He’s spoken the most about his children with grimes. Specifically, he’s singled out baby X Æ A-Xii (X for short) as his “protege.” He often showed the kid off during video calls

By the way, he has yet to address Xavier’s decision to have a name and gender change. Xavier himself has been light-lipped, except for his court filings.

Tags
Elon Musk Vivian Jenna Wilson Xavier Musk
John Israel A Send an email 22 June 2022
Back to top button
Close
We use cookies on our website to give you the most relevant experience by remembering your preferences and repeat visits. By clicking “Accept All”, you consent to the use of ALL the cookies. However, you may visit "Cookie Settings" to provide a controlled consent.
Cookie SettingsAccept All
Manage Privacy