In 2019, South African rapper and producer Zoocci Coke Dope released the “Anxiety” album. The self-baring project features a total of 13 tracks and features contributions from some of the big names in the industry, including Priddy Ugly, Kwesi Arthur, Flvme, Nasty C, Die Mondez, YoungstaCpt, 25k, and more. It fast became a critical success as it touched topics of anxiety and so much that fans could relate to.

The project made him one of the most relatable and genuine artists in the country. Since then, fans have anticipated the release of the follow-up album. Finally, the project was released to massive acclaim on Friday, February 25, 2022. As expected, Zoocci Coke Dope remained honest and touched on topics his fans could relate to. The album also features contributions from some of the top artists on the scene and contains fewer tracks than the previous project. 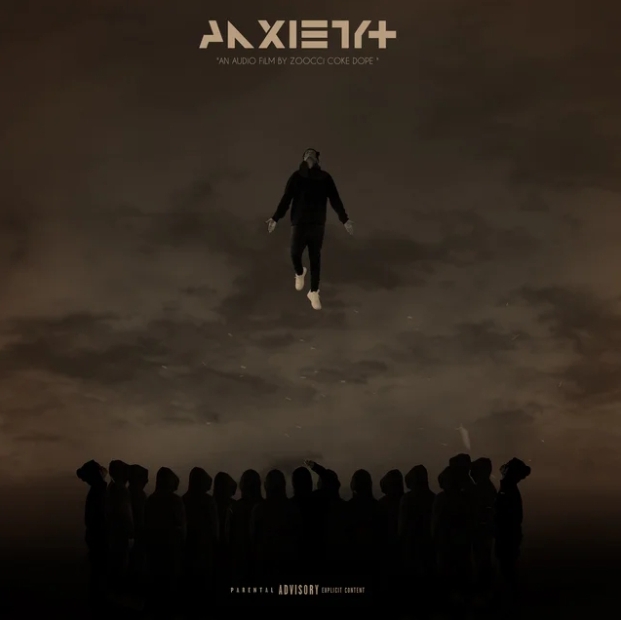 There is an apparent similarity between Zoocci Coke Dope’s former “Anxiety” album and the new one “Anxiety+”. The previous album’s cover art tears a page from several popular music videos (especially a scene from Kendrick Lamar’s “Humble”) where Zoocci is pictured amid several hooded heads. However, he maintains a stern look at the camera.

The new Cover art still sees him with several others (still hooded but pictured in the dark). Zoocci is elevated above the others while they all look up at him like a risen messiah. He looks like a messiah in a sports outfit and white sneakers. If we say so ourselves, the artwork is a step up from the previous one.

While Zoocci Coke Dope’s previous album “Anxiety” had about 9 features, the new “Anxiety+” album was reduced to a total of 3 features. Additionally, the new album features more solo tracks than collaborative tracks.

Zoocci features “Why Me” and “Ye x4” collaborators Nasty C and Blxckie on the track “LiFT ME UP”. He also features Lady Zamar & Mars Baby on “PLUS+” and Tellaman & Stogie T on “iLL Prelude”.

Before the release of the album, he showed love to all the artists who contributed to it with him. He revealed that he respects them and called them “titans at their craft”. Each of the featured artists delivered terrific performances on the project while still acknowledging the fact that Zoocci is king on his turf.

The beauty of a Zoocci Coke Dope album is that he handles both production and delivery by himself. Not many artists in the country can boast about doing this efficiently. Before the album dropped, Zoocci shared a message acknowledging the people who worked on it with him.

He shouted out BigLesForReal stated that they started work on the album between 2015 and 2016 and that it has finally become full circle. He thanked him for helping him create the best project “I’ve ever made”. The album’s production is well-executed, and Herc Cut The Lights & Zoocci Coke Dope both contribute to producing some of its tracks.

The “Anxiety+” album is delivered in two languages, including English and Zulu. In addition, all the guest contributors on the project deliver in their best-suited languages on the songs they contributed to.

Zoocci Coke Dope continues where he left off on the previous album. The project kicks off with a track talking about the album is centred on “Anxiety”. The project maintains the message that the previous one carried, and Zoocci proves that he has grown a lot since the release of the previous one. Check it out if you haven’t already.

Tags
Review Zoocci Coke Dope
John Jabulani Send an email 27 February 2022
Back to top button
Close
We use cookies on our website to give you the most relevant experience by remembering your preferences and repeat visits. By clicking “Accept All”, you consent to the use of ALL the cookies. However, you may visit "Cookie Settings" to provide a controlled consent.
Cookie SettingsAccept All
Manage Privacy