The Big Brother Mzansi reality show is currently the talk of the Rainbow Nation. Since the show began last week, it had kept viewers glued to their seats, with many stating they would do anything not to miss the drama.

Last Sunday was to have been an eviction day – already, the word out there was that it would be a fake eviction. And that was what it was, ultimately. You might think of it as a twist – which it is, in a sense.

With QV announcing her exit to take care of her mental health, Biggie had brought in two new housemates without prior announcement. One of them is Vyno, and the other is, well, Nthabii.

Because he’s one of the new faces in the Big brother Mzansi house, Nthabii has been an object of great curiosity – not just to the housemates but to viewers as well. Below we share some key facts about the new housemate.

Nthabii is no pushover. She’s as competitive as they come, and she does whatever she wants, kicking away anything that stands in her way. Thi much some of her fans have already acknowledged when she stepped into the Big Brother Mzansi House, as you can see below. 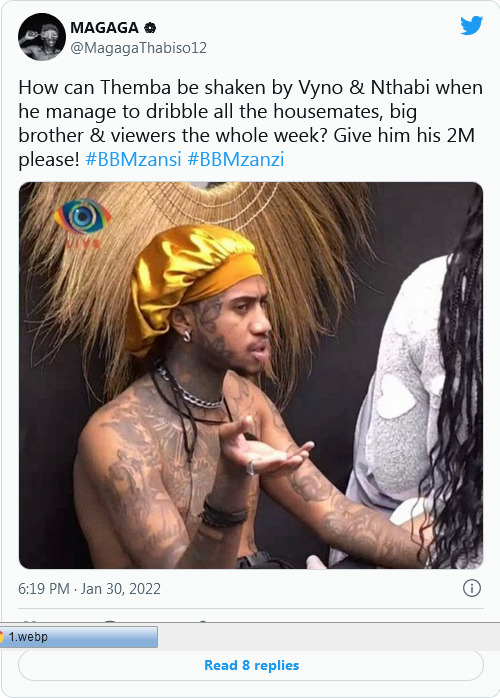 She Loves A Good Time Out with Friends

Dor the out-of-doors, you can count Nthabii in any day, anytime. She loves sharing drinks with friends, generally unwinding, and having a good time. So you can think of her as another gregarious companion. She is.

With Nthabii there are no boring moments. She confesses to being loud but clarifies that it’s not her worst trait. She also admitted that some people find her loud trait annoying. But then she’s who she is.

She’s an Athlete and a Netball Nut

Nthabii is crazy about athletics, but her key focus is netball. Whenever she’s not training, she’s out there with friends having a convivial time over drinks.

She’s the Only Child of Her parents

True or false, Nthabii has big dreams of going home with the R2 million prize money.

Tags
#BBMzansi Big Brother Mzansi Nthabii
John Israel A Send an email 1 February 2022
Back to top button
Close
We use cookies on our website to give you the most relevant experience by remembering your preferences and repeat visits. By clicking “Accept All”, you consent to the use of ALL the cookies. However, you may visit "Cookie Settings" to provide a controlled consent.
Cookie SettingsAccept All
Manage Privacy