Born 8 November 1988, Busiswa Gqulu popularly known by the stage name Busiswa or Busi is an award winning singer, songwriter and poet in South Africa. She is known for the song “My Name” is with DJ Zinhle, which she recorded after being discovered by Oskido, the CEO of Kalawa Jazmee records. She is known for her powerful vocals and electric dance moves.

Busiswa is originally from Mthatha, Eastern Cape, South Africa but later relocated to Durban with her family at a very young age, due to her parents work. She developed passion for writing poems at the early age of 15 and performed her first poetry work at her grandmother’s funeral. She took part in talent hunts and festivals which had ti do with poetry and also hosted her monthly poetry event.

Busiswa attended her high school education in Durban but couldn’t go to the university because of financial constraints.

Busiswa got her first major breakthrough after she featured on a song by DJ Zinhle titled “My Name Is”. Although music for her started at an early age, when she fell in love with poetry and later through a friend got introduced to Oskido, who then linked her up with DJ Zinhle for the single. After the success of the collaboration, Busiswa has released hits like “Ngoku”, “Lahla”, and was featured on Bhizer’s hit, “Gobisiqolo”. She has also gone on to release albums that have done well in the music industry. She has performed in gigs in various countries like Zimbabwe, Angola, and Namibia.

Busiswa since her debut into the industry she has released 2 studio albums.

Busiswa since her debut has released over 10 songs and 2 albums. Here are her songs in no actual order.

Busiswa keeps her relationship life private. The singer welcomed her son in 2018 with her baby daddy Katlego Mlangeni who is a politician.

Busiswa has gotten herself various awards and nominations since her debut, among this are nominations for the Most gifted dance video and video of the year at the Channel O Africa Music video award which she won at the award show and also got to perform on stage.

Busiswa’s net worth is estimated at 1 million dollars. This is calculated from payments for show performances, album sales, money made from her Youtube views, endorsement deals, Properties and investments owned by her, the artiste is doing well for herself financially and is one of the top artistes in South Africa to reckon with. She has carved a niche for herself in the industry which others look up to.

Busiswa is of Xhosa stock, and she speaks the language fluently. She’s proud of her Xhosa roots and uses the language, besides English, in her music.

Details about Busiswa’s house are pretty sketchy. Once upon a time, though, in the spirit of the #10YearChallenge, she had shown her family house, the state it was in 10 years ago, and what it currently is – after her renovation exercise. 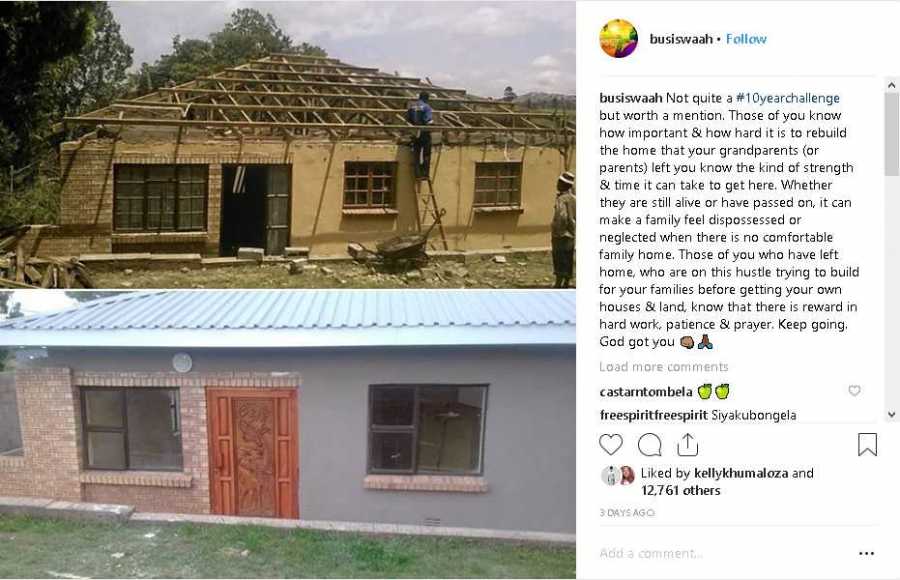 Busiswa has cars, all right. But details about them are pretty sketchy. In the past, however, she had complained on social media that thieves have cloned her vehicle number plate and have been using it to commit petty crimes in the city. For this, she had lashed out at the company offering her tracking services.

The “SBWL” singer is the mother of a son named Lakhanya Gqulu. The kid was born on 8 January 2018. He was the product of Busiswa’s relationship with Katlego Mlangeni, a man he accused much later of having abused her emotionally and financially.

Busiswa’s songs from both her albums are available on all major platforms.

Busiswa is one of the top artists in South Africa who came to the music scene fully equipped. She has made that obvious with the hit songs she has been dishing out since her debut.

Tags
Busiswa
Wuraola Salawu Send an email 1 April 2020
Back to top button
Close
We use cookies on our website to give you the most relevant experience by remembering your preferences and repeat visits. By clicking “Accept All”, you consent to the use of ALL the cookies. However, you may visit "Cookie Settings" to provide a controlled consent.
Cookie SettingsAccept All
Manage Privacy