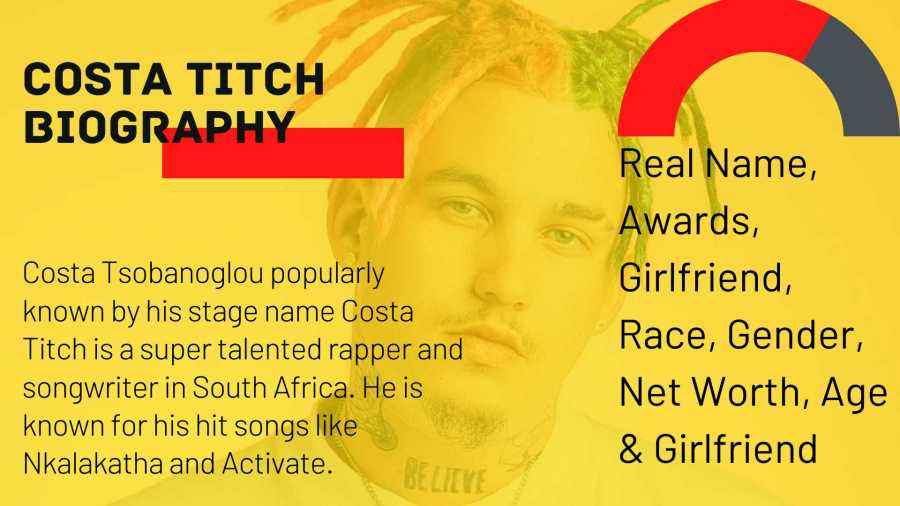 Born 1995, Costa Tsobanoglou popularly known by his stage name Costa Titch is a super talented rapper and songwriter in South Africa. He is known for his hit songs like Nkalakatha and Activate. The rapper, who was a dancer before, has been able to create a style for himself which everybody can reckon with and has been dropping songs consistently since his debut. His songs are well publicized and has gotten him various recognition.

Is Costa Titch White Or Coloured?

Many have been confused of the rapper’s race, but he is obviously a white boy from Nelspruit , he however has a lot of coloured friends in the music industry and some which he sees as idols.

Costa Titch is originally from Nelspruit Mpumalanga in South Africa. He noticed he had an interest for entertainment at an early age and decided to start up as a dancer. He later moved to Johannesburg in 2014 and continued to develop his rap skills overtime.

There is no information available on this at the time of the writing. Will be added as updates about it are available.

Costa Titch got his major breakthrough after the release of his hit song “Activate” which became popular after the time of its debut. Although he got into the entertainment scene at a very early age, he started up as a dancer in the New Age Steez dance crew which had Phantom Steeze and Tumi Tladi as members.

Costa Titch later came into the rap scene and has worked with rappers like Cassper Nyovesrt. The dancer turned rapper is now making music on a full-time basis. He is said to be one the pioneer of African trap music and has had influence on other artistes in the genre. His rap beat are traditionally trap with very high energy drum samples.

The multi-talented artist uses a lot of Isizulu lines in his raps and it has really worked in his favor overtime. His raps are majorly light at heart as most of his songs are tailored for the dance floor. He is making a name for himself has his “Nkalakatha” hit is one of the best thing to happen to South African music scene.

The song “Phezulu” featuring rap diva Boity , also became an all time people’s favorite, showing the rap prowess of the two rappers. He has since his debut released topnotch visuals which further shows his talent as a rapper and dancer. He is one of the top MCs in the game with his EP releases and collaborative efforts with other top artists in the Country.

Costa Titch has since his debut released various Extended plays, like;

Costa Titch has since released more than 10 songs and various EPs. Here are some of his top songs in no particular order.

Costa Titch is not in any relationship of public knowledge at the time of this writing. Like any other artists, the rapper likes to keep this aspect of his life private.

Costa Titch’s Net worth has not been fully calculated as at the time of this writing, but the singer is making a lot of money from attending shows and festivals, song streams and video views.

Costa Titch’s songs from his studio projects and featured songs are available on all major platforms.

Costa Titch is one of the fast rising artistes in South Africa, who upon his debut has been able to make a lasting impression. from his song releases to his collaborations and album he has been able to create a sound people love. He is one of the few MC’s in the game that are changing the face of rap and making the Afro-trap genre popular.