Tione Jayden Merritt, popularly known as Lil Tjay, is an American rapper, singer, and songwriter. He gained recognition following the release of his song “Resume” in 2018. This landed him a record deal with Columbia Records in the same year.

Lil Tjay was born in the Bronx borough of New York City, in the United States of America, on April 30th, 2001. He clocked twenty-one years old in April 2022.

The exact estimate of Lil Tjay’s net worth is unknown to the general public. Neither he nor anyone in his team has ever listed his assets. However, his record deal and gigs have inspired several publications to estimate his wealth at $3 million.

There have been rumors of Lil Tjay dating social media influencer Lala Baptiste. In 2021, the two appeared in the official music video for Lil Tjay and Pop Smoke’s collaboration. Lala is from Georgia, U.S, and boasts a whopping 1.1 million followers on Instagram alone. She also has over 360 thousand subscribers on her YouTube channel. She is known for constantly posting and promoting fashion brands and lifestyle content.

Lil Tjay’s height is above average. He is 5 ft 9 inches tall.

Lil Tjay’s merch is stocked with a variety of black hoodies and different T-shirts. The T-shirts carry the “Not In The Mood” design. Prices range from $35 to $75. Place your orders here.

Lil Tjay and his two younger siblings were raised by their single mother in the Bronx borough of New York City. He has described their place as a “roomy” apartment. Tjay has stated that he was the problem child of the three. He often got into petty robberies and school fights. 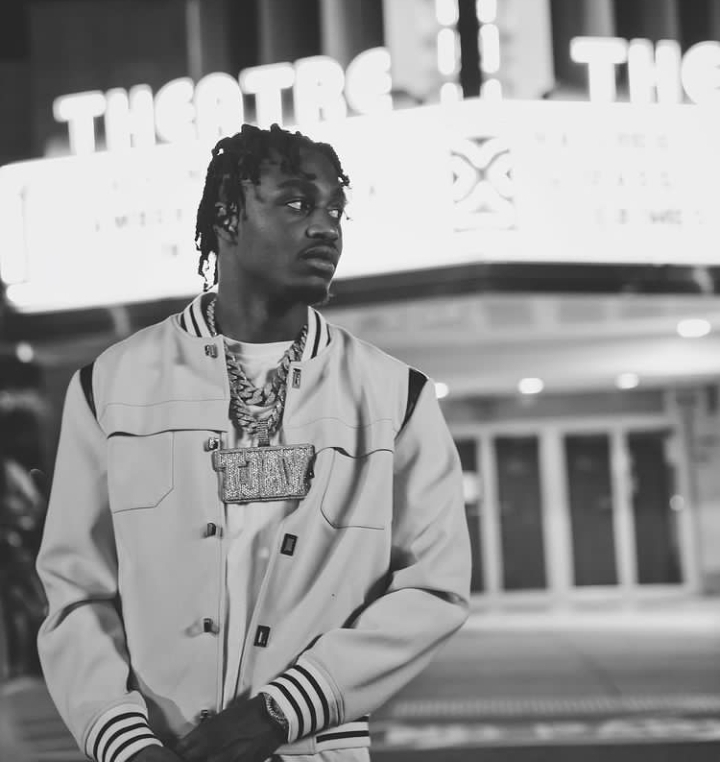 Lil Tjay began rapping while serving a sentence in a Youth Detention Center. He later wrote and released one of his hit songs, “Resume,” on SoundCloud. The song immediately became a success. In 2018, he competed and placed first at the Coast 2 Coast LIVE NYC All Ages Edition. His performance gained the attention of a record label, A&R judging the showcase. He later released the song “Brothers,” which also became a success and snagged him a record deal with Columbia.

Lil Tjay’s debut EP, No Comparison was released at the end of 2018. In 2019, he and Polo G dropped the platinum-selling “Pop Out.” His debut album “True 2 Myself” dropped on October 11, 2019. He has since released more successful projects.

On June 22, 2022, Lil Tjay was shot multiple times during an attempted robbery in Edge Water, New Jersey. The shooter was also hit in the crossfire but escaped with help. Tjay was rumored to be paralyzed on June 27th.

“Smelly” rapper is named Lil Tjay. He is a New York City rapper who gained prominence rapping about his life and hustle. Smelly was his late friend.

Although the exact estimate of Lil Tjay’s worth is unknown, most publications believe he is worth around $3 million.

Lil Tjay gained fame rapping about his life in the streets of New York and his love life. Many have found it entertaining.

Yes, Lil Tjay and Polo G are friends. They were first label mates and then made the hit song “Pop Out” together. Following the song’s success, they returned with another one titled “First Place.”

No. Lil Tjay and Polo G are not related. They are just label mates who became friends.

There have been rumors of the two dating. It is believed that Lala fought with her best friend Rubi Rose over Lil Tjay.

Yes. It is believed that Lil Tjay and Pop Smoke were friends before Pop’s death. Tjay released a tribute song titled “Forever Pop” in his honor following his demise. He also promised to keep Smoke’s legacy going.

No, Lil Tjay and Rubi Rose are not dating. Rumor is that Lala set them up but ended up snatching Lil Tjay for herself. This led to the best friends’ lingering beef.

Yes, Melvoni is the younger brother of Lil Tjay. He broke out on his own in 2019.

No, Lil Tjay and Pop Smoke are not related. Lil Tjay showed so much respect for Pop Smoke following his death. He also released the tribute song “Forever Pop” in his honor.

Yes, Lil Tjay can sing. He does that in his music.

Tags
Lil Tjay
John Jabulani Send an email 1 July 2022
Back to top button
Close
We use cookies on our website to give you the most relevant experience by remembering your preferences and repeat visits. By clicking “Accept All”, you consent to the use of ALL the cookies. However, you may visit "Cookie Settings" to provide a controlled consent.
Cookie SettingsAccept All
Manage Privacy