Grace Naledi Mandisa Matthews, professionally called Naledi Pandor, is a South African politician and an educator who is currently serving as the Minister of international relations and cooperation (since 2019). Since 1994, Naledi has served as a Member of Parliament (MP) for the African National Congress. Naledi is known for her selfless determination to serve her country, South Africa.

Naledi Pandor was born in Durban in the Natal Province in the then Union of South Africa on December 7, 1953. She celebrated her 68th birthday on December 7, 2021.

Naledi also has a Masters’s degree from the University of Stellenbosch in 1997, where she majored in General Linguistics, and a Diploma in Higher Education, Administration, and Leadership from Bryn Mawr Summer Programme in 1992. She obtained another Diploma from the Kennedy School of Government, Harvard University, in 1997, where she studied Leadership in Development. In 2019, Naledi received a Ph.D. in Education at the University of Pretoria. 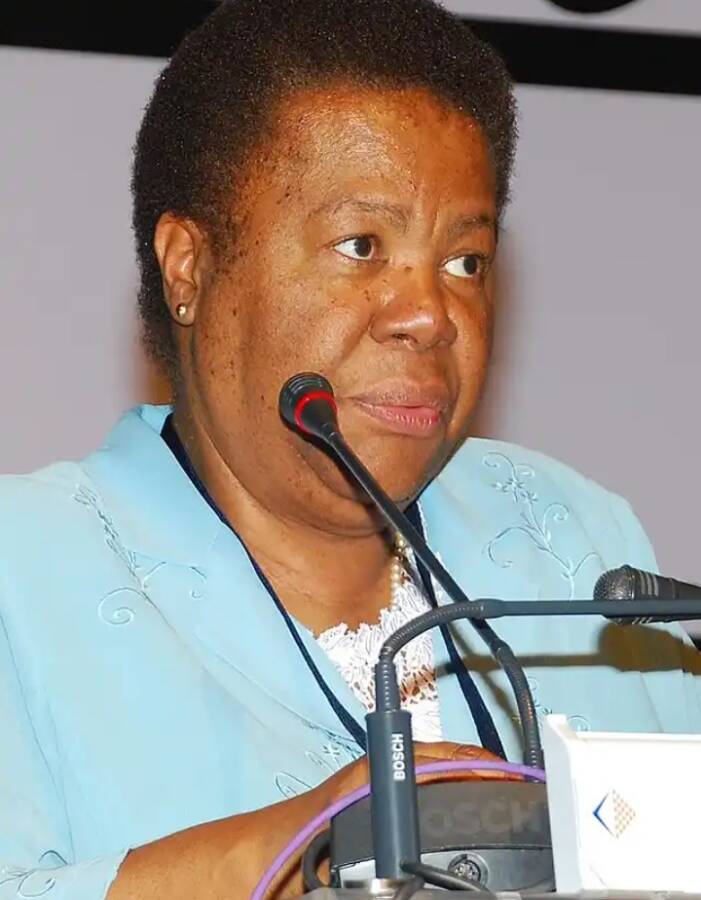 Naledi Pandor is the daughter of Joe Matthews and Regina Thelma. Her parents are both late. Her father, Joe, was an anti-apartheid activist and the son of Z. K. Matthews, an early leader of the African National Congress. Her father and grandfather were both charged with treason in 1956, along with 154 other anti-apartheid activists, all of whom, including the Matthews, were acquitted.

Naledi is married to Sharif Joseph Pandor. The couple met while she was studying in Botswana. She had to convert to Islam because of him. She revealed that she had no reservations about doing that, saying, “My parents said God is God. As long as you worship Him we will support you, and the Islamic principles are universal. Certainly, Islam demands much more of you in terms of observance.”

In February 2007, Naledi stated that she strongly supports the use of Afrikaans and other indigenous languages as media of instruction in schools. Gov.za reported that she had reacted to a Democratic Alliance (DA) press release (14 February) in which she was accused of leading “an ideological crusade against Afrikaans” and a Freedom Front (FF) press release (14 February) that claimed it was “now quite clear that the government wants to take control of every single school in South Africa.”

“The truth is that this is not a language issue: it is purely an issue of access to education. Over 100 learners were being denied entry to a school that is clearly under enrolled. Where a school is not fully enrolled, we must allow places to be taken up by children who want to be educated in whatever medium they prefer.

You can contact Naledi Pandor via the following details;

What religion is Naledi Pandor?

Who is Naledi Pandor’s father?

Who is Naledi Pandor’s husband?

Yes. Aisha Pandor is the daughter of Sharif Joseph Pandor and Naledi Pandor.

How old is Minister Naledi Pandor?

Who is Naledi Pandor’s brother?

Zolani Matthews is Naledi Pandor’s brother. He is the former CEO of Prasa.

Where is Naledi Pandor from?

Naledi Pandor was born in Durban in the Natal Province in the then Union of South Africa.

Where did Naledi Pandor study?

Who are Naledi Pandor’s children?

Tags
Naledi Pandor
John Jabulani Send an email 11 August 2022
Back to top button
Close
We use cookies on our website to give you the most relevant experience by remembering your preferences and repeat visits. By clicking “Accept All”, you consent to the use of ALL the cookies. However, you may visit "Cookie Settings" to provide a controlled consent.
Cookie SettingsAccept All
Manage Privacy