Bryson Lashun Potts, professionally known as NLE Choppa (or YNR Choppa), is a popular American rapper and songwriter born in Memphis, Tennessee, in the United States of America. Shetta shot to fame in 2019 with his hit single “Shotta Flow”, which peaked at number 36 on the Billboard Hot 100 songs chart. The song was eventually certified platinum by the RIAA. It was also featured on his debut EP, “Cottonwood” which was released later that December.

Bryson Lashun Potts, a.k.a NLE Choppa, was born to a Jamaican mother in Memphis, Tennessee. He was raised in the Parkway Village area and enrolled on Cordova High School, where he was in the basketball team. At 14, he began freestyling to his friends and formally took music seriously at 15.

His mother, Angela Potts, began managing him after he expressed an interest in music. His first song, “No Love Anthem”, was released under YNR Choppa in March 2018. His debut mixtape, “No Love, The Takeover”, was released on July 22 in the same year. His opening verse and dance moves in “No Chorus Pt. 3” by Shotta Fam Collective earned him some online buzz.

NLE Choppa was born in Memphis, Tennessee, the United States, on the first day of November, in 2002. He celebrated his 18th birthday in November 2020. On the same day, he released his second mixtape, “From Dark To Light”. 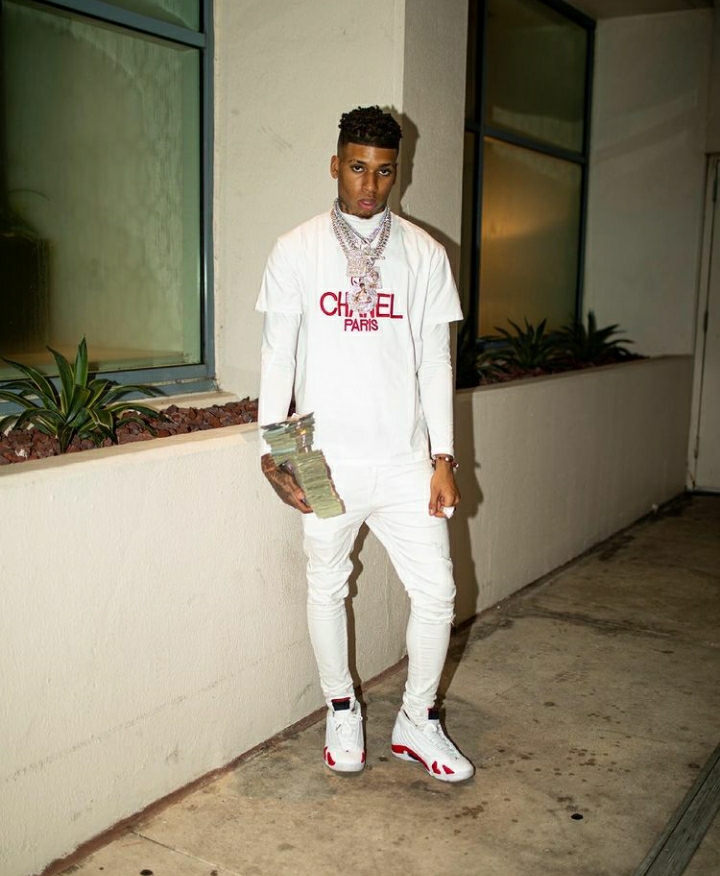 Several Media outlets estimate NLE Choppa’s net worth to be around $3 million. However, the rapper is yet to confirm if this is accurate.

NLE Choppa has numerous tattoos on various parts of his body. A lot of them are related to his work and his love life. On his inner right forearm are the words “No Love Ent” and two Chinese characters. The words “SHOTTA II” and a gun are tattooed just below his elbow. His stomach is covered with the words “TOP SHOTTA” and two handguns on either side of them. There is smoke coming out of the barrels of the guns and rising toward the words. He tattooed his then-girlfriend Mariah’s name on the left backside of his head, just along his hairline. From his elbow to his wrist, his right forearm is a tattoo of an M16 rifle. The word “Cottonwood” is tattooed on the upper right side of his forearm. The tattoo is covered in red ink, and the letters “O” are stylised as broken hearts, and the “T”s have the words “NLE” and “God” written in them. The word “NLE” is tattooed on his neck, and the faces of four men are inked to his chest, with the words “La Familia” written above them. 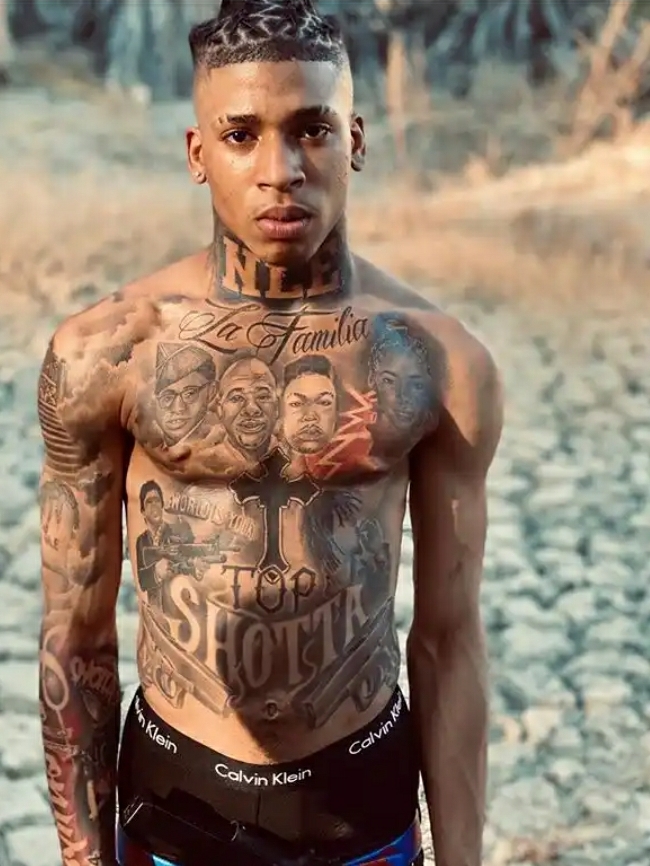 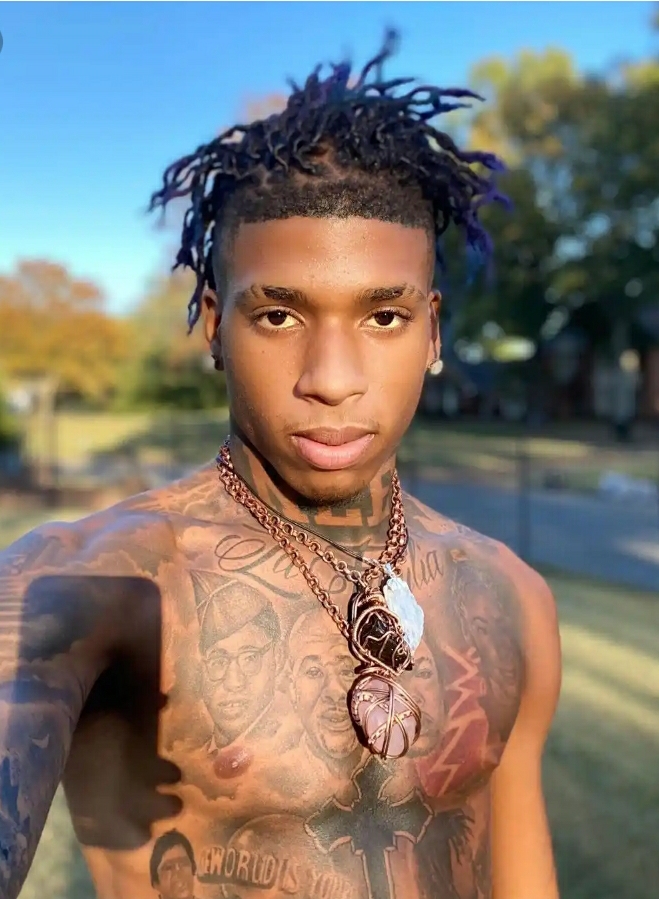 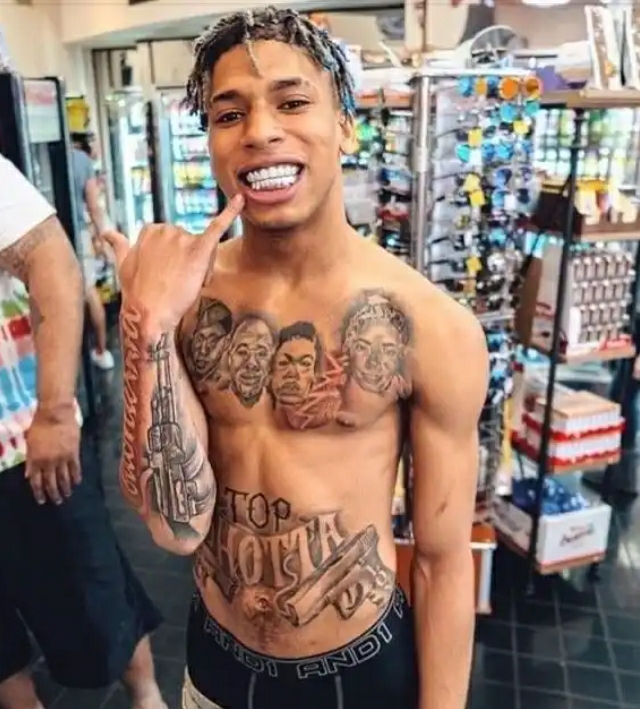 NLE Choppa is 185cm tall; that’s 6’1. He used to play basketball while in high school. 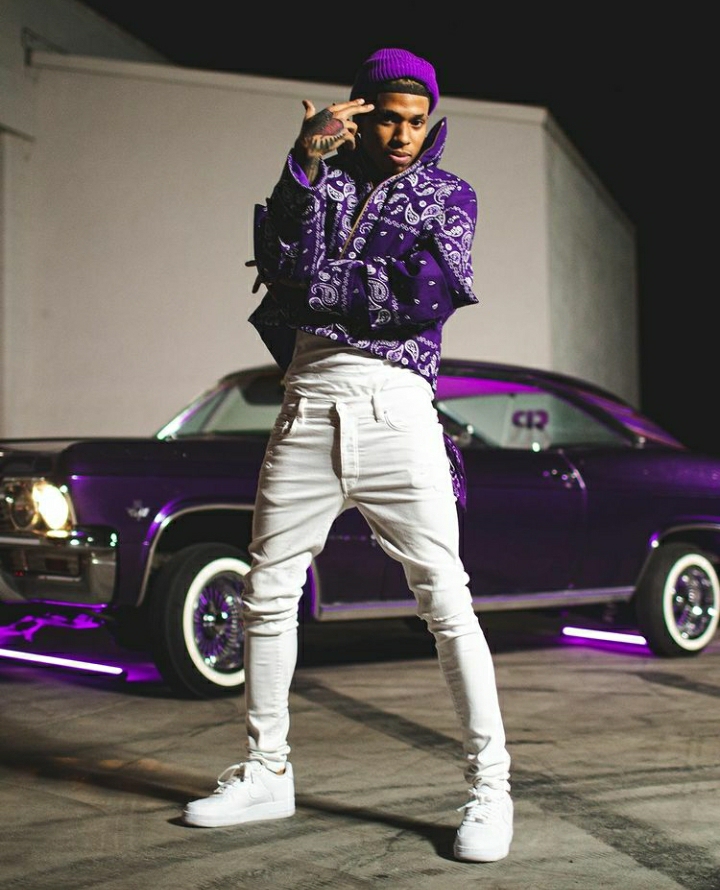 NLE Choppa is known to change his hairstyle constantly. He has been spotted with Spick curly hairstyles, which he later switched up to a fade haircut. He has also had on braids dreadlocks, Bantu Knots dreadlocks, twist dreadlocks, and blue coloured hair. He once showed off his bald shaved head to social media. 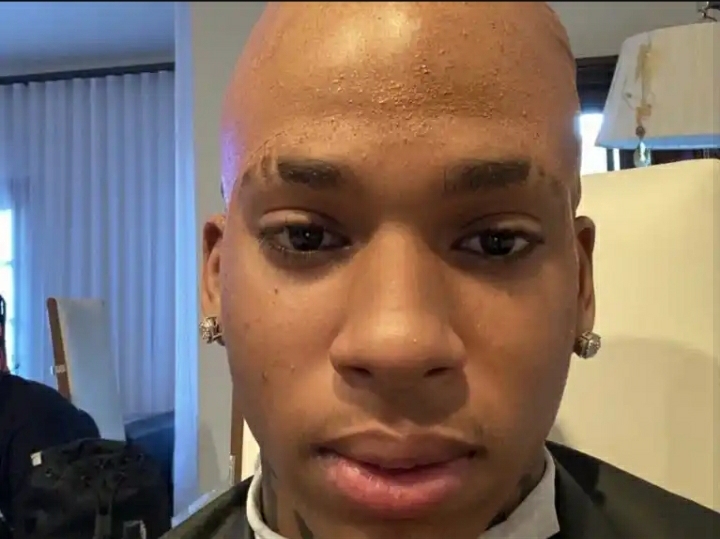 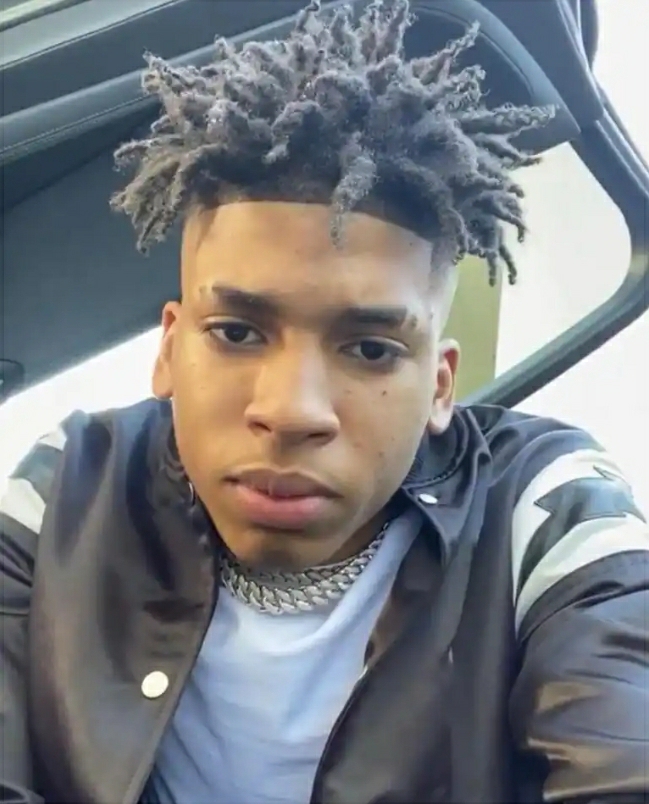 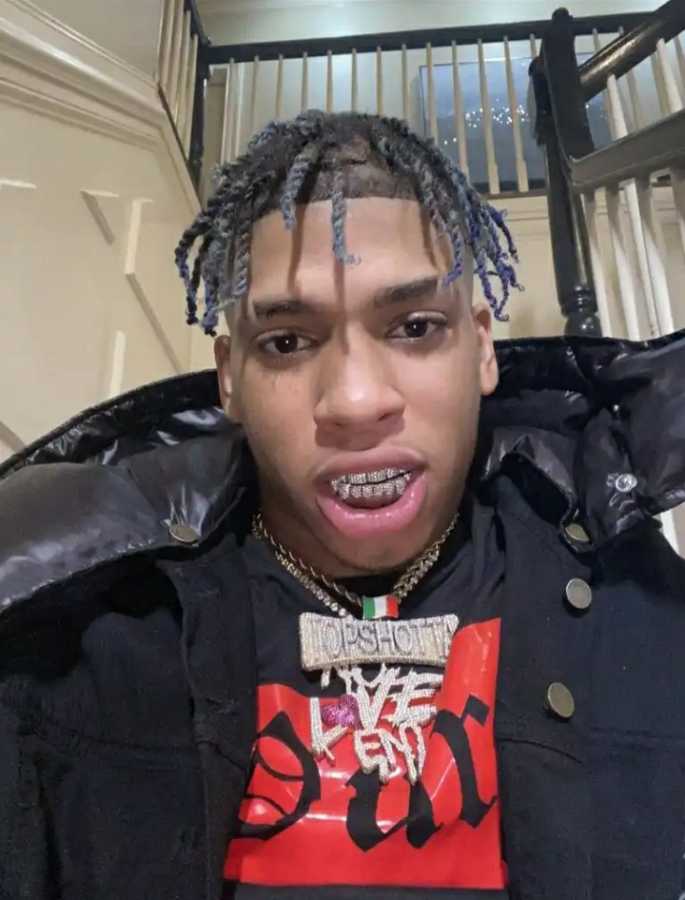 NLE Choppa welcomed his first child, a daughter named Clover Brylie Potts, on June 20, 2020. He is quoted saying that having a child on the way changed his mindset “I knew I had to change and be a better person for my daughter”.

He made an effort to keep fans updated on his healthy living, starting the YouTube account “Awakened Choppa”. He shared videos documenting his healthy and holistic lifestyle, which includes gardening and veganism. He has also been open about struggling with depression and often raps about it.

NLE Choppa has not shared any photos of his house. However, he is believed to live with his Jamaican mother in a beautiful home. He has also shared several photos of himself standing next to various pricey cars, including a white Rolls Royce. 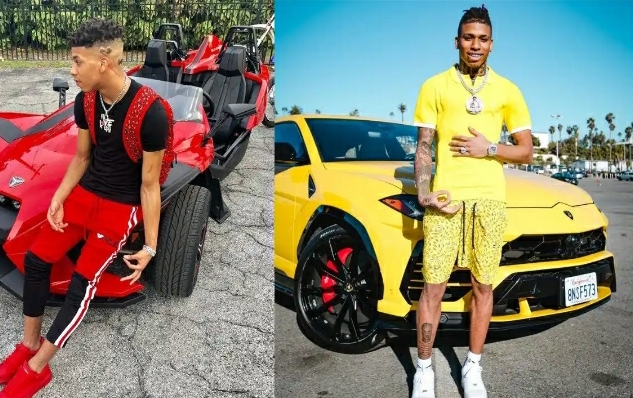 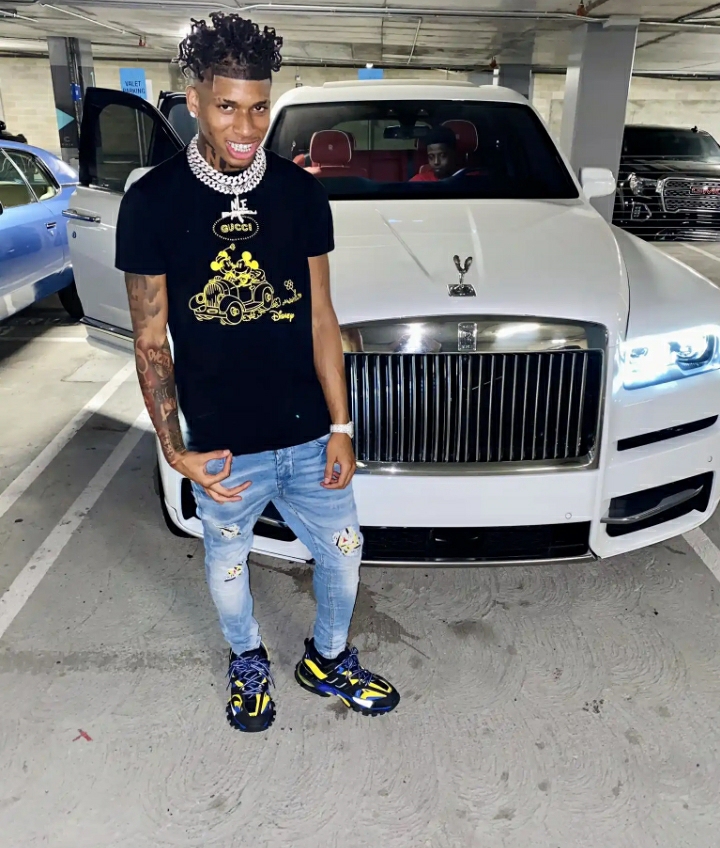 Tags
NLE Choppa
John Jabulani Send an email 28 July 2021
Back to top button
Close
We use cookies on our website to give you the most relevant experience by remembering your preferences and repeat visits. By clicking “Accept All”, you consent to the use of ALL the cookies. However, you may visit "Cookie Settings" to provide a controlled consent.
Cookie SettingsAccept All
Manage Privacy