Her introduction to music was pretty early. As a child, she was said to have performed in various dancing and singing completions. But it wasn’t until 2015 that she released her first single, “Imposter.”

She has remained in the consciousness of music lovers ever since.

Rowlene was born 3 March 1997, which makes her exactly 23 years this year. She was born in the Cape Town area of South Africa.

Back in 2018, when Nasty C, the de fact “Zulu Man With Some Power,” announced to the world the launch of a new record label called Tall racks Records, he informed fans at the same time of his signing of Rowlene.

A year later, speculations had been rife that the record label had vanished as quickly as it had appeared. But Nasty C dismissed it all as mere rumour. According to him, the record label is as strong as can be.

Rowlene has the singular distinction of being the only artiste signed to Nasty C’s tall Racks Records since the label’s founding two years ago. Nasty C’s explanation is that he wants to focus on her. 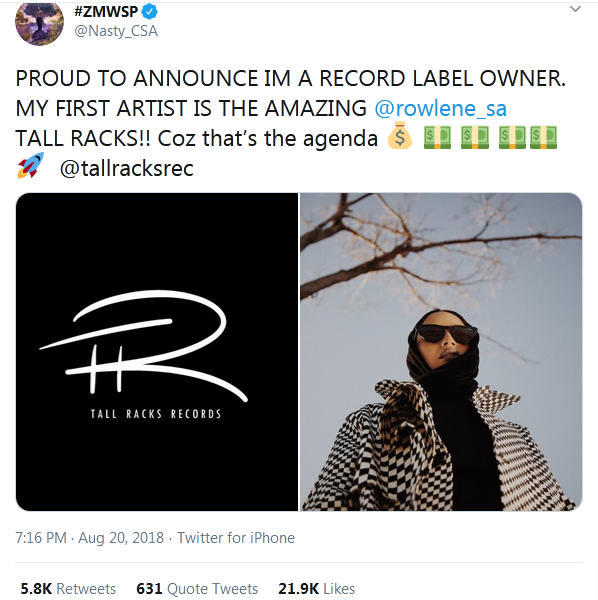 A lady this beautiful will never be short of men desiring her company. And indeed Rowlene has had the attention of some of Mzansi’s notable musos. However, her most famous relationship ever was that with Tellaman.

Back in 2018, a screenshot of what appears to be a conversation between her and Tellaman about a lady called Nandi circulated online, leading to what was then called a “love triangle.” Tellaman had apologized then for whatever embarrassment the episode might have caused Rowlene

Rowlene confessed later that Tellaman was far too controlling, always wanting to know where she was and what she was doing. It was more than she could bear. Along the line, it was reported that they had broken up.

Rowlene had also been linked to Mathew Power. On his birthday two years ago, she had written him a “crazy” birthday note, stating she was proud to call him her friend. The Instagram post has since been deleted, so it might be that they are no longer together.

If you have an interest in her, you might want to shoot your shot, as they say.

Rowlene doesn’t exactly thrive in noise over personal assets. In fact, it is next to impossible to find her bragging about her assets or showing off her possessions. However, it has been said that she has a net worth of about R1 million.

Given her appeal as a singer, of course, we expect the sum to shoot up in the coming months.

Tags
Rowlene
John Israel A Send an email 8 October 2020
Back to top button
Close
We use cookies on our website to give you the most relevant experience by remembering your preferences and repeat visits. By clicking “Accept All”, you consent to the use of ALL the cookies. However, you may visit "Cookie Settings" to provide a controlled consent.
Cookie SettingsAccept All
Manage Privacy