‘ON MY SOUL’ TOUR UNDERWAY NOW

As always, Bino comes through with his signature slick and stunning melodies between dynamically direct flows. Meanwhile, multiplatinum Los Angeles superstar Roddy Ricch delivers a knockout cameo, elevating the track to another level altogether. Both rappers firmly claim spots at the front of the new West Coast.

Most importantly, “Lemme Find Out” sets the stage for the arrival of Bino’s anxiously awaited new project, 100 Roses, dropping on November 5th, 2021.

Earlier this week, he launched the ‘On My Soul’ Tour at a packed show in San Diego. He begins a sold-out two-night stand at the Novo in downtown Los Angeles this evening and concluding tomorrow. Tickets were gone within hours of going on sale, speaking to Bino’s hold over his hometown. Check out the full itinerary below. BlueBucks Clan and Coot Corleone accompany him on the road.

He’s just continuing an unbelievable summer. Most recently, he uncovered “NO MAKEUP” [feat. King Combs] (prod by BLXST) to widespread critical acclaim. In addition to looks from REVOLT and more, The Source hailed it as “a track that is set to keep listeners on the dance floor,” and HipHopDX raved, “The 2021 grind of West Coast artist Bino Rideaux proves how worthy he is of getting his flowers for being one of L.A. top talents this year.” In a recent profile, UPROXX christened him, “undoubtedly LA’s next breakout star.”

Get ready for a whole lot more from Bino Rideaux. 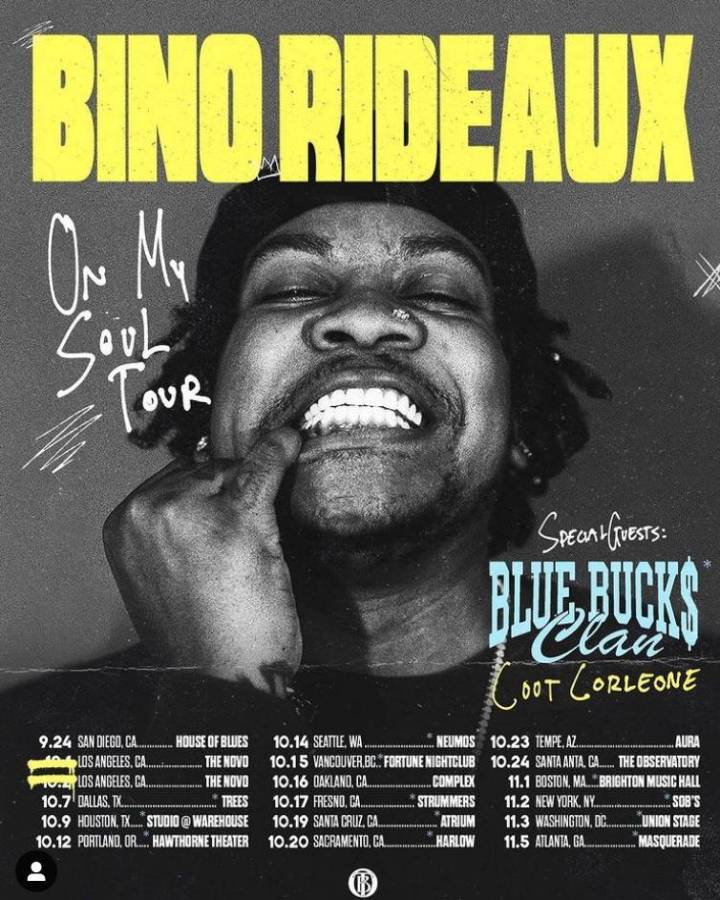 Bino has soundtracked the summer solo and alongside frequent collaborator BLXST. They recently reteamed for the red hot Sixtape 2. Not only did it clinch #1 on the Billboard Heatseekers Albums Chart, #4 on the Apple iTunes Hip-Hop/Rap Top Albums Chart and #8 on Spotify’s Top 10 Albums Debuts Chart in the US, but it also surged on to the Top 200, marking a career first entry on the chart for Bino. In addition to plugs from Complex, HotNewHipHop, and more, Revolt TV raved, “the project combines the most ear-pleasing qualities of both R&B and hip-hop,” and VIBE summed it up best, “This moment belongs to BLXST and Bino Rideaux with their new project, ‘Sixtape 2’.” It has already cracked 20 million-plus streams and counting!

Blxst and Bino celebrated the release with an interactive fan experience hosted by Rotation, Amazon Music’s global Hip-Hop and R&B brand. Inspired by the music video for their hit single “Movie,” both artists were able to give back to their community, providing over 300 free car washes to attendees. They also just shared the official Sixtape 2 | The Documentary.

Sixtape 2 is out now via Red Bull Records streaming on all platforms.

About Bino Rideaux
With a one-two punch of laidback flows and hypnotic melodies, Bino Rideaux has quietly shaped the next era of West Coast hip-hop. Growing up in South Central, he crafted his 2015 independent project, Life Is Like A Movie, out of a D.I.Y. studio in his grandmother’s house. Gaining traction around L.A., he co-founded Out The Blue Records and dropped music at a prolific pace. Penned in the wake of his homie KP’s death, “100 Days 100 Nights” caught the attention of the late Nipsey Hussle. He featured on Nipsey’s tracks “Clarity” and “The Field” before they teamed up on the 2017 joint project No Pressure.

As his profile rose, Bino linked with Blxst on Sixtape in 2019 before unleashing his full-length debut, Outside, which boasted appearances by heavyweights such as Ty Dolla $ign, Fredo Bang, Mozzy, and BlueBucksClan. In addition to praise from Complex, LA Weekly, VICE, and more, UPROXX named it one of the “100 Best Albums of 2020.” Signing to Def Jam in partnership with Out The Blue, he only perfected his signature style on the likes of “Mismatch” and “BET” before igniting 2021 with the entrancing guitar-laden trip of “Incredible” [feat. Drakeo The Ruler]. Pegged as one of Rolling Stone’s “Breakthrough 25,” Billboard championed him among “6 LA Rappers to Watch in 2021” and went on to describe him as “the brightest star to emerge from that orbit.” Meanwhile, KAZI christened him “one of the West Coast’s most exciting new talents.” Selling out his fall performance dates in record timing, this October sees Bino returning to the stage for a back-to-back performance run in his hometown at The Novo in downtown Los Angeles.

Tags
Bino Rideaux Roddy Ricch
Thato Siyabonga Send an email 1 October 2021
Back to top button
Close
We use cookies on our website to give you the most relevant experience by remembering your preferences and repeat visits. By clicking “Accept All”, you consent to the use of ALL the cookies. However, you may visit "Cookie Settings" to provide a controlled consent.
Cookie SettingsAccept All
Manage Privacy