It’s been weeks of diss songs back and forth since Big Zulu released his 150 Bars songs. In the song, Big Zulu took jabs at some of the most prominent artists in the South African music scene, including K.O, Emtee, Cassper Nyovest and many more.

Here is Cassper Nyovest’s response to the diss track, and it sounds heavy. He calls this one “4 Steps Back”, and he has decided to go solo, which is typical for a diss song. Cassper Nyovest hinted at the release yesterday via his social media platforms with a cryptic caption which left many confused about whether a diss track is coming from Cassper Nyovest or not. 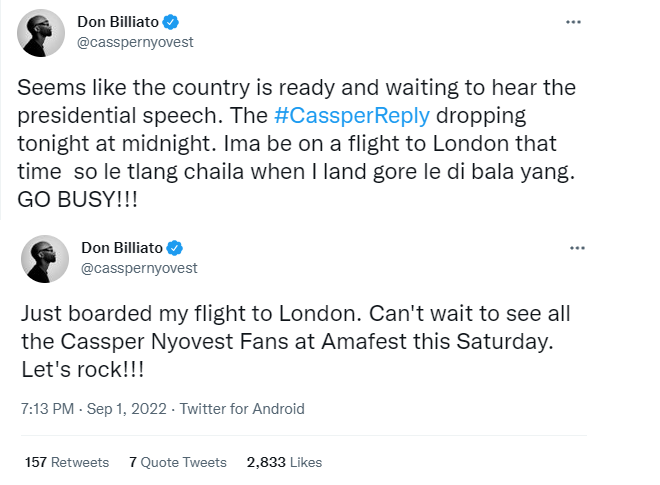 Cassper is the latest A-list artist to drop a response to Big Zulu’s diss following Duncan, K.O, Kwesta and many more. Fans have been very impressed with the releases so far. Many believe that the endless rounds of diss songs might be the re-birth of SA hip-hop.

Just few weeks ago, Cassper Nyovest released hit first hip-hop song titled Put Your Hands Up after trying out amapiano for some years. We are excited to see how fans would receive his new Big Zulu diss song titled “4 Steps Back”. Cassper Nyovest is currently on his way to the United Kingdom to perform at the Amafest festival.

Check out “4 Steps Back” below.

Tags
Big Zulu Diss Cassper Nyovest
James Lethabo Send an email 2 September 2022
Back to top button
Close
We use cookies on our website to give you the most relevant experience by remembering your preferences and repeat visits. By clicking “Accept All”, you consent to the use of ALL the cookies. However, you may visit "Cookie Settings" to provide a controlled consent.
Cookie SettingsAccept All
Manage Privacy