DJ Lag has just returned with another winner dubbed “Meeting With The King” album, which you can stream here on UbeToo, your go-to place for everything South African music.

Known for bringing life to almost every project, DJ Lag repeats the safe feat with his latest drop, leaving his audience with no choice but to embrace what he’s offered.

Prior to releasing the project, the songster had shared a teaser on Instagram, without some details, including when fans should expect the body of work.

Well, the project is here now. And in fairness to the house producer, he actually put out a work worth hearing. So, yes, you can listen to this project over and over without fear of being taken prisoner by boredom.

The project might ring house, but nay lover of good music out there should find great pleasure in the project. So it is here irrelevant if you’re a house nut or nah.

The weekend is almost here, it’s welcome to count “Meeting With The King” album by DJ Lag as one of the projects to vibe with. Let the music begin. 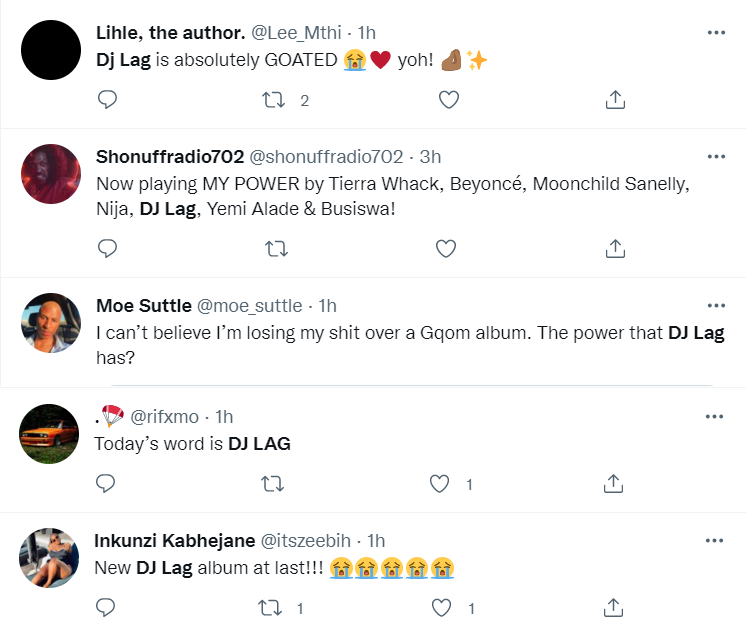 Gqom pioneer DJ Lag has always been a forward-thinking producer, and his 2022 release sees him move the genre forward by incorporating fresh flavours into the sound that’s defined Durban’s dance music scene since the 2010s. “There are a few tracks that are slower than my usual tempo,” DJ Lag tells Apple Music. “I am seeing it as a shift of gqom; I like to call it ‘gqom 2.0’. We started at 124 BPM, slowing down with ‘Samba Ngolayini’, which went viral and still bangs in the clubs, and now I am taking it all the way to 116 BPM.”

For Meeting With the King, DJ Lag employs a broader palette consisting of amapiano, Afro-house and Afro-tech. The best example of this marriage of different styles is “Khavhude”, a collaboration with trailblazing amapiano producer Mr JazziQ. Amapiano’s defining kick roll and log drum are mashed up with high-pitch synths and hissing pads, further decorated by the vocals of Vic_typhoon and late yanos icon Mpura. “I can make gqom that sounds exactly like it did back in 2014, when we started making it, but I am no longer there. I have grown,” Lag explains. But with all the experimentation, DJ Lag’s sound remains uncompromisingly gqom, with the genre’s trademark thwacking drums, automated digital chants and hypnotic synths and pads. Here, Lag (Lwazi Asanda Gwala) breaks down key tracks from the album.

“Khavhude” (feat. Vic_typhoon & Mpura) [DJ Lag & Mr JazziQ]
“This is an extremely important track, as it features the late Mpura. I sent the beat to JazziQ, who got Mpura and Vic_typhoon on it. When we listened to their vocals, everyone was convinced that we wouldn’t touch it further. It was just so raw and honest that everyone felt it strongly, and we knew immediately it would make the album. Mpura was one of those artists that just delivered like that. When the news came out about the accident and his passing [in 2021], listening to this song was very intense. Gone too soon and a big loss to the industry.”

“DJ Lag” [DJ Lag, Babes Wodumo & Mampintsha]
“Babes and Mampintsha performed in one of my events, Something for Clermont. At the show, they came up with this chant, ‘DJ LAG’, that went on for about 45 minutes of the set between them and the audience. I decided to include it in the album because it is a personal moment. That was an epic night. The show was amazing, and we danced until the sunrise. A couple of weeks later, I made the beat and worked on this with them at their place. We also worked on ‘iKhehla’ at the same time. Babes is amazing, and I wish nothing more than she finds her feet and does a major comeback. She is the full package.”

“Lucifer” [DJ Lag & Lady Du]
“This was one of the late additions to the album. Lady Du had sent back the vocals and, somehow, it got lost amongst a bunch of other music I was exchanging with other artists at the time. I went back and reworked some of the production and didn’t only decide to include it on the album—we also decided to make it the first single. The one thing about Lady Du is that she strongly gets behind her music; she has been around for so long, and she understands the industry and her audience.”

“Raptor” [DJ Lag & Sinjin Hawke]
“‘Raptor’ is a collaboration with Sinjin Hawke. He also mixed and mastered this song himself. He is technically impeccable. I have so much respect for his work and his ethic. He is also a great DJ and performer. We have bumped into each other in the US and Europe on the same event or festival lineups, so it was [just] a matter of time to do a track together. The first version had a ROSALÍA vocal on it, which sounded incredible. Unfortunately, as she has hit superstardom, this is not the easiest sample to clear, so Sinjin worked on the current vocal to replace that.”

“Destiny” [DJ Lag & Amanda Black]
“Amanda Black is a whole mood. She is a strong and very outspoken woman and has, over time, been attacked for this on social media. I have respect for her because she continues to stand her ground. The song is about self-empowerment and Amanda sings, ‘I will remember who I used to be’ and, later, ‘I will choose my destiny’. This song gave me quite a hard time technically, and I was so adamant that it needed to be on the album that we ended up mixing it with seven different mixing engineers, literally from all around the world. People were saying, ‘Just leave it out of the album’, but I was not having any of it.”

“Yasho Leyonto” [DJ Lag & Dladla Mshunqisi]
“It’s all in the energy of the performance for me in this song; I think Dladla Mshunqisi did a great unpolished, fun and heartfelt vocal take. ‘Yasho Leyonto’ is a chant that people on the dance floor call back to the DJ; we call it ‘ithemu’, which means ‘theme’. It was started by DJ Jelzin in Durban, and now everyone is doing it.”

“Keep Going”
“This track was added at the end of January 2022, less than a month before the album release. I made it in the middle of the night in Durban sometime between Christmas and New Year’s Eve. We wanted to add it because it brings in this new ‘gqom 2.0’ direction and the fusion to amapiano into focus. The BPM is much slower than most of what I do—it’s down to 116 [from the usual 127 for gqom tracks]. The team loved the track, and I’m glad we managed to fit it in. I haven’t even played it in my sets yet.”

“Chaos” (feat. General C’mamane & Omagoqa)
“The song features the new producers General C’mamane and Omagoqa. It’s a showcase of some younger Durban talent that I really connect with. We worked on this during the lockdown from different studios, bouncing files back and forth even though we only live 30 minutes away from each other. It has an ominous energy about it—police siren-like sounds in the background and all. It is also sexy and slow, with a build-up of layer upon layer, and a friendlier twist towards the end. I am big into gaming, and this could be a soundtrack to a hero’s journey through a post-apocalyptic world.”

“Into Ongayazi”
“This one is a dance-floor favourite in Durban. It is hard and for the very late hours, but people love it. What is special in this track is that I am singing all the vocal ad-libs, hums and whistles. It was one of my first experiments with my own voice and it is unusual. We released it as a pre-add in November because people wanted to play it on their sets and hear it on the dance floor.”

Tags
Album DJ Lag Gqom House
John Israel A Send an email 18 February 2022
Back to top button
Close
We use cookies on our website to give you the most relevant experience by remembering your preferences and repeat visits. By clicking “Accept All”, you consent to the use of ALL the cookies. However, you may visit "Cookie Settings" to provide a controlled consent.
Cookie SettingsAccept All
Manage Privacy