Flvme’s Lost Files have been found and the songster has shared some of the numbers with his fans, notably “Fall Thru” & “Only One.”

In a tweet the controversial muso hinted at starting the album process again – probably with the to sonngs as interim  releases. You can check out his post below. 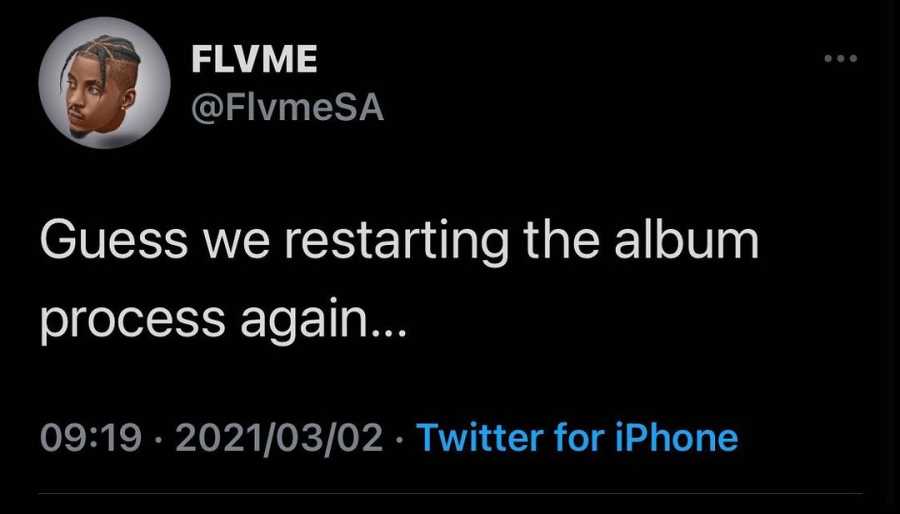 Both songs from the Lost Files have no guests. Flvme sang song and actually stood out on both numbers. If both songs should e taken as prelude to what is imminent, then we see many fans out there watching out for what might drop from the hio hop star next.

“Fall Thru” and “Only One” dropped amid a little crisis with fellow rapper Emtee. Bothe have fired shots at each other who is superior to the other and has recrded the most career wins.  So heated was the argument that another notabe rapper, Da L.E.S, had had to intervene, asking both to hang their guns.

What do you think of “Fall Thru” & “Only One.” And how would you rate both? Do you have a favourite among them? You may want to stream and download both songs below and join the conversation by dropping your thoughts in the comment section.

Tags
Flvme Hip Hop
John Israel A Send an email 4 March 2021
Back to top button
Close
We use cookies on our website to give you the most relevant experience by remembering your preferences and repeat visits. By clicking “Accept All”, you consent to the use of ALL the cookies. However, you may visit "Cookie Settings" to provide a controlled consent.
Cookie SettingsAccept All
Manage Privacy