MKeyz Mogomotsi simply called “MKeyz” has finally released his much awaited Amapiano album titled Isiko. The talented singer took to his Instagram page to announce the release of the EP which is released for free download on the popular free download platform, “Datafilehost”.

Mkeyz who has been seen on numerous collaborations over the past few years has not released a project of his own, even though has has been the engine behind some of the biggest Amapiano tunes in Mzansi. Some of his genius work includes a feature on De Mthuda and Njelic song titled Umshado, Majita, Vhavenda and many more. Making the announcement. Mkeyz wrote:

Greetings In the Name of Music

I greet you with such great enthusiasm because I’ve got what u’ve been waiting for. Finally the wait is over, the Ep is out on datafile host. Your support will be highly appreciated…

The 7-tracks album features some of his regular collaborators, including De Mthuda, Njelic and Mhaw Keys, see full tracklist below: 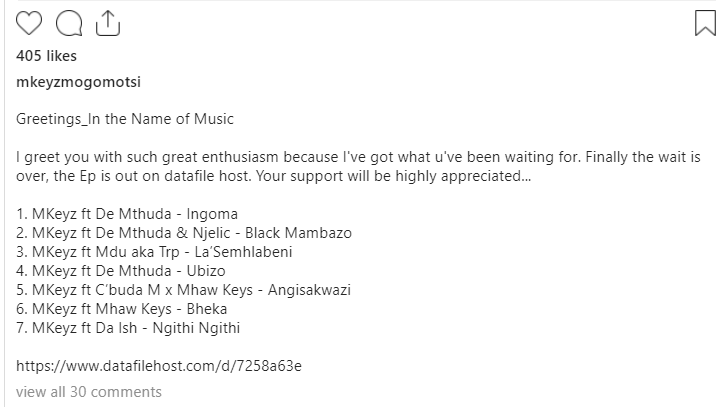 Fans can finally get a full dose of the talented creator and respected artist.

Tags
Mkeyz
Thato Siyabonga Send an email 6 August 2020
Back to top button
Close
We use cookies on our website to give you the most relevant experience by remembering your preferences and repeat visits. By clicking “Accept All”, you consent to the use of ALL the cookies. However, you may visit "Cookie Settings" to provide a controlled consent.
Cookie SettingsAccept All
Manage Privacy