Just about 6 months from the release of Gqom duo’s chart topping single dubbed iParty, they have been able to put some songs together in form of an EP.

The latest project is titled “Make Cape Town Great Again” and it is an 11-track EP which contains some of their biggest hit singles. The project features vocals from the likes of Betusile Mcinga and regular collaborator T-Man.

It’s definitely time for Cape Town to shine again as these two keep the Gqom sound alive with their frequent releases. Over the past weeks before “Make Cape Town Great Again” EP, they have released three singles which are remixes of some popular songs, Ngeke Badaniswe” Ft. Betusile Mcinga , “Money Heist Anthem” Bella Ciao and Everything I Wanted (Bootleg Mix).

But before the release of their recent weekly drops they have jointly and individually released impressive tunes which has turned them to household names in Mzansi. They were also recently featured on this week’s Saturday 25th of July Channel O lockdown house party where they wowed fans with their talent. The project reached over 10,000 downloads within 3 hours of release, excited Mshayi took to social media to show appreciation. 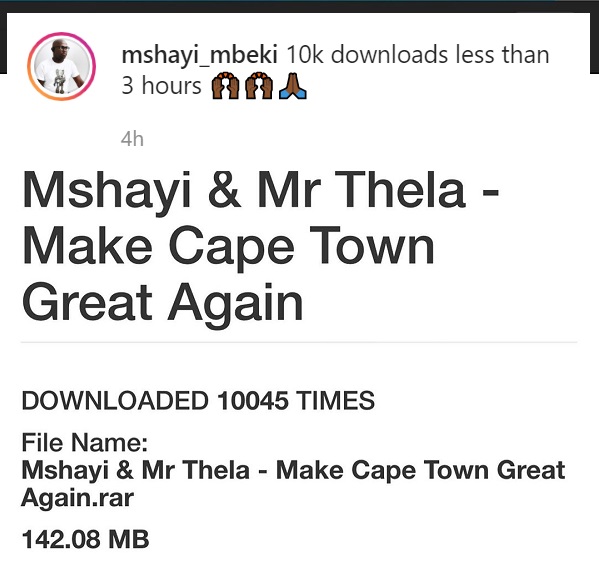 “Make Cape Town Great Again” EP is a full Gqom project and an exciting one that the duo have released for free download. Making the announcement on his Instagram page, Mr Thela assured fans that the project will soon be available on more streaming platforms including Apple Music and iTunes.

@_mrthela (Mr Thela)
Make Cape Town Great Again EP is now out for downloads. Link on bio. Apple Music & iTunes will be available soon
Thank You Yet Again South Africa For The Love And Support!!

In the era where Amapiano seems to rule everything, these two are refusing to shift away from their core base by dropping something for Gqom fans. Check it out below and do let us know what you think. Stream/download links here.

Tags
Gqom Mr Thela Mshayi
Thato Siyabonga Send an email 26 July 2020
Back to top button
Close
We use cookies on our website to give you the most relevant experience by remembering your preferences and repeat visits. By clicking “Accept All”, you consent to the use of ALL the cookies. However, you may visit "Cookie Settings" to provide a controlled consent.
Cookie SettingsAccept All
Manage Privacy