Friday 18 September is almost here, that was when the talented Afrotaiment artist promised to deliver the much anticipated single, Cideralla, and we are pretty excited about the fact that the song made it online today, we cannot confirm how, maybe just an early release or some sort of strategic leak. To cut the story short, Naakmusiq’s new song titled “Cinderella” is already out before the announced the release date.

We’re not alone in our excitement, of course. Afotainment is, and so is Naakmusiq. To give fans an idea of what is to come, Naakmusiq shared a 30 second teaser of the song yesterday. Fans were chuffed with the teaser, as evident from the storm of flame emoji the post spawned.

Afrotainment’s post announcing the imminent release of the song, as well as Naakmusiq’s post on the same subject, is given below. 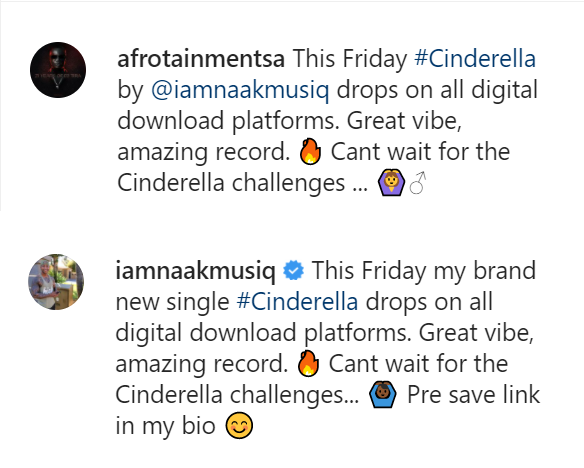 Produced by Golden, the song, which bears a love theme, will be available on iTunes, Google Play, Deezer and Spotify on Friday 18 September 2020 but free download links are already being shared on the internet. So, whatever your streaming platform of choice, you can can have it now of wait till it is available on your preferred streaming platform.

Tags
Naakmusiq
John Israel A Send an email 17 September 2020
Back to top button
Close
We use cookies on our website to give you the most relevant experience by remembering your preferences and repeat visits. By clicking “Accept All”, you consent to the use of ALL the cookies. However, you may visit "Cookie Settings" to provide a controlled consent.
Cookie SettingsAccept All
Manage Privacy