Over a week ago, Takura began the countdown to the release of his extended play “Star Signs.” The countdown ended with the official unveiling of the project across digital platforms, including Apple Music, on 2 October 2020.

Looking back, one can only smile because the songster took his time with the EP and the finished work is pretty decent, a worldwide compilation that is as entertaining as it is didactic, but not cloying.

“Star Signs” EP by Takura features 12 tracks in all, beginning with the intro “It’s Ok Not To Be Ok” and ending with “Mufaro.” Artistes like Freeman HKD, Holy Ten. Laylizzy, WaMambo, Priddy Ugly, Tellaman and Nutty O made the guest list. 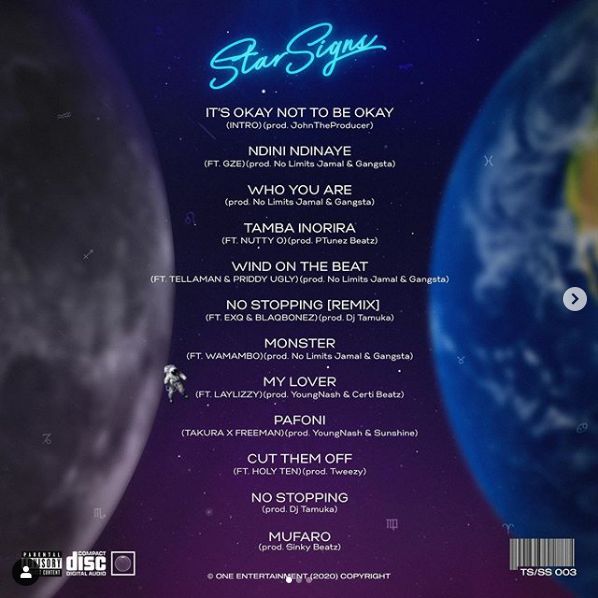 Some of the songs on the project have been released previously, so fans had an idea what was imminent. The finished product is, of course, one you wouldn’t mind having on your playlist.

If you’re feeling a little adventurous, you may want to delve into the liberating orbit of “Star Signs” immediately. The experience is one to remember. Best believe.

How would you rate this body of work, though? You may want to stream it below and join the conversation by dropping your thoughts in the comment section.

Tags
Takura
John Israel A Send an email 7 October 2020
Back to top button
Close
We use cookies on our website to give you the most relevant experience by remembering your preferences and repeat visits. By clicking “Accept All”, you consent to the use of ALL the cookies. However, you may visit "Cookie Settings" to provide a controlled consent.
Cookie SettingsAccept All
Manage Privacy