Nigerian singer Tems is out with a new body of work titled “For Broken Ears” album – her debut.

This body of work houses 7 tracks in all, most of them written and produced by Tems herself. The songstress, whose birth name is Temilade Openiyi, did not bother to have guests on the tracks. But it’s a beauty nonetheless, this project.

All tracks in the album, except “Damages,” were mixed and mastered by Omeiza. Spax gets the credit for the mixing and mastering of “Damages,” a track Tems released before dropping the album

“For Broken Ears,” which begins with an “Interlude” and ends with “The Key,” is a deeply moving compilation exploring life in its many hues. Love, relationship and other themes pop in the songs in this collection.

In this album, Tems promises light. She says the compilation is for the rebels and for anyone looking for an alternative to the darkness. If you’re that someone, you’ve come to the right place. 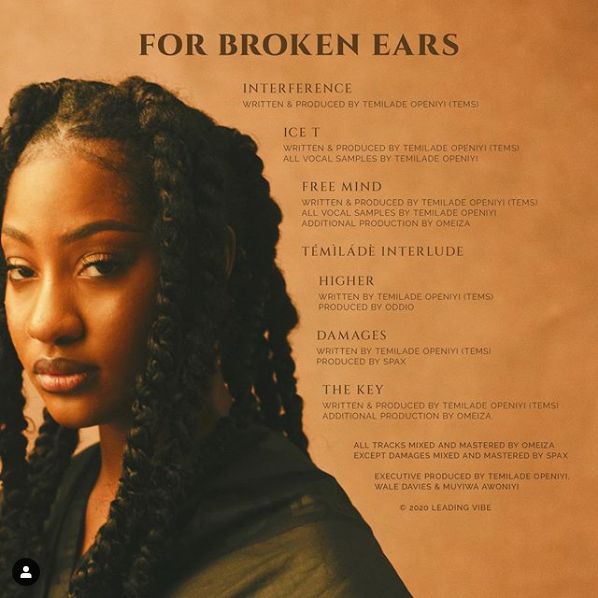 The album may have been long in the making, but the final project is splendid. So one can say, in retrospect, that the wait for this debut was worth it. It’s hard to listen to this project and not be energized.

Tags
Afrobeats Album Nigeria Tems
John Israel A Send an email 3 October 2020
Back to top button
Close
We use cookies on our website to give you the most relevant experience by remembering your preferences and repeat visits. By clicking “Accept All”, you consent to the use of ALL the cookies. However, you may visit "Cookie Settings" to provide a controlled consent.
Cookie SettingsAccept All
Manage Privacy