The introduction of books to PCs was a bit of a shaky one, but it’s finally starting to find its place in the market. Several companies have had tried to get a stake in this market, most notably Apple with the release of its iPad. Now we’re seeing a greater expansion in the e-book market.

Amazon Kindle is a  software and hardware platform developed by Amazon.com, as a way to sell electronic books and have a device to work in tandem with their sale. After its release, Amazon released the Kindle for PC and Mac free of charge, allowing users to read Kindle books on their PC or Mac. However, Kindle still didn’t find its way everywhere. Fortunately however, Amazon has announced that Amazon Kindle for PC application will come preinstalled on some Asus netbooks and notebooks. This PC applications acts to fill in for the Kindle and will allow users to sync pages and continue reading from any of their other hardware. This will be a great move for Amazon, and give Kindle-lovers more variety when it comes to what device they should choose to read from. Amazon isn’t stopping there however, for it plans to have Kindle running on devices which run Google’s Android OS.

While this is great news for amazon, a dark cloud looms on the horizon. Kindle is currently Amazon’s most popular item, and it is sure to be threatened by the Apple iPad and Google’s advance into the e-book market.

Via eWeek, image via ScrapeTV 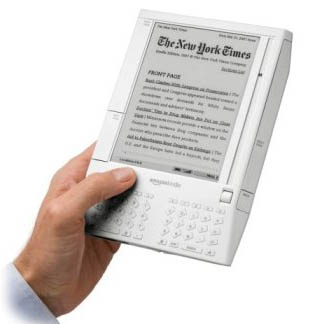