The alpha version of Moblin 2.0 has been out for a while, but the open-source Linux stack is stepping it up by releasing the beta. We’ve discovered some screenshots and other delectable details, and I can say with complete objectivity that they look fantastic.

Below is an example of some of the extensive upgrades made to Moblin, including a flashier user interface, toolbar, and “m-zone” home page that rounds up social networking content. This isn’t your father’s Linux.

Linux vendors are hoping that the new stack will revitalize meager Linux sales in the netbook category. Moblin is calling this new version Moblin v2.0 for Netbooks and Nettops, so it’s clear what industry their cross-hairs are aimed at. This may also up the stakes for Google’s Android, whose recent appearance in the netbook industry has made the prospect of Windows alternatives more viable.

Novell announced earlier that it has been working closely with computer giant Intel in preparing a Moblin v2.0 version of SUSE Linux for market. Windows 7 is on the horizon, and as the behemoth approaches more and more members of the Linux community will be looking to exploit holes in its marketing plan. It seems like there’s never been a better time to try to jump ahead of Microsoft.

Below is Novell’s OpenSUSE beta, based on Moblin v2.0 and showing the m-zone home page: 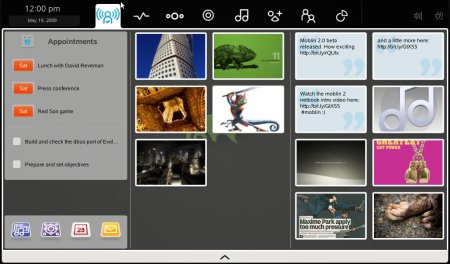 The new UI is certainly pretty, and is optimized for netbooks and nettops. Moblin v2.0 uses the Clutter animation framework and depends on (according to Moblin.org) “GL and the physics engine.” We’ve got a video of the Clutter interface here, and it looks like it’s making exceptionally effective use of multi-touch – perhaps more than Windows 7. 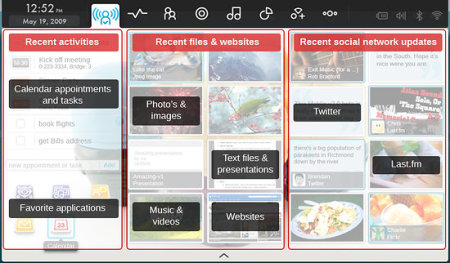 “We feel the code has reached a level where both developers and enthusiasts can play with it… While fine tuning, bug fixing, and polishing is ongoing, so is performance improvement, all of which you should start seeing rolled into the weekly builds.” 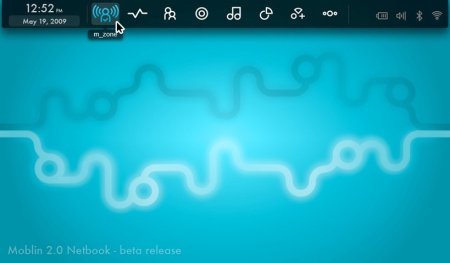 The new toolbar (above) shows up when you hover over the top of the screen, saving precious netbook screen space. The icon panels are pleasantly minimalist and “include features such as status, people (contacts), Internet, media, pasteboard, applications, and zones.”

Below is the m-zone appointment screen, acting as a home for at-a-glance access to your daily activities. Calendars with tasks, appointments, recently accessed files and live updates from your favorite sites can be synchronized for instant access and improved efficiency. 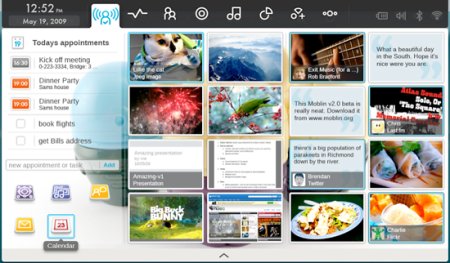 DesktopLinux has noted a host of other highlights of the new Moblin 2.0 Linux stack: 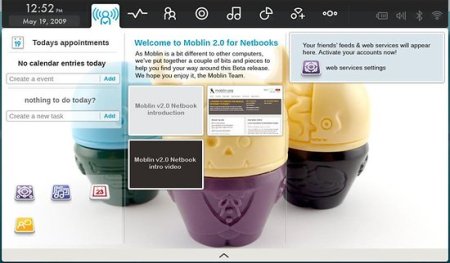 All of that on top of two-second boot times? I’m a convert. You can download the Moblin v2.0 beta here, and be sure to share your experience with us here at NBB.