The Fujitsu Lifebook M2010 may come in one of several eye-catching colors, but otherwise, it’s pretty ordinary. The performance of its battery even lags a bit behind the competition.

This netbook has a two-tone, hard plastic case that comes in a variety of colors, including Ruby Red (pictured above). The screen has a glare-reducing coating. The keyboard on this machine is a bit on the small side, but at least the arrow keys are relatively large. The touchpad of the M2010 has a nice, textured surface and is of roughly standard size.

This little netbook’s performance is average as well. It scores a 34 on the WorldBench 6 (a Windows benchmarking tool offered by PC World Magazine), placing it in the medium range of performance among netbooks. 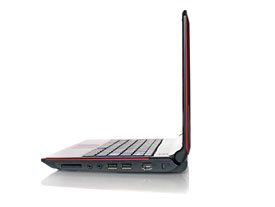 The battery life of the Lifebook M2010 is nothing to boast about though. Fujitsu claims that the battery of this netbook lasts for roughly 2.5 hours, but when tested, it was closer to 2 hours. This is measly, especially when compared to the battery lives of netbooks like the Samsung N110, whose battery can last for up to 9.5 hours.

Fujitsu made a bold move by releasing this netbook, but the results aren’t so bold. Don’t be deceived – the Lifebook M2010 is the Average Joe of netbooks.

Tags
Netbookboards
Thato Siyabonga Send an email 12 February 2010
Back to top button
Close
We use cookies on our website to give you the most relevant experience by remembering your preferences and repeat visits. By clicking “Accept All”, you consent to the use of ALL the cookies. However, you may visit "Cookie Settings" to provide a controlled consent.
Cookie SettingsAccept All
Manage Privacy