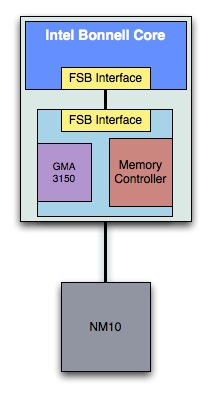 The Intel Atom Pine Trail platform, which was originally thought to be a grand step forward for netbooks, has not met our expectations.  It may be in part due to over-hyping by followers of its development, but ultimately the performance gains provided by the new line were marginal at best and irrelevant at worst.  So what caused this discrepancy?

Those hailing the Pine Trail as a godsend to netbooks graphics ultimately misconceived what the GMA 3150 controller could do. Compared to Nvidia’s Ion platform (currently the only way to get good graphics on a netbook) it is completely out of its league, and only looks good compared to the original Atom’s GMA 950.

But the real issue is what happened when Intel condensed the “Diamondville” platform from the original Atom to “Pine Trail”.  A quick glance at the image up top (“Diamondville” left, “Pine Trail” right), clearly shows us that nothing really happened. Same cores and the same interfaces.  And the problem is that while Intel was busy integrating the memory controller onto its chips for the i7 on desktops, they got lazy about Pine Trail on netbooks.  The memory controller still needs to be interfaced via the front-side bus, so no lower memory latency, no drastic performance improvement.  And to point out the obvious, the exact same core is being used on the old and new Atoms.

Is it fair for Intel to say that Pine Trail is a better product in terms of performance than the Atom 330?   Arguably, yes.  But really this whole affair simply shows that Intel is sitting unchallenged in the netbook market, as AMD has yet to provide a platform for it and ARM lacks the resources to take on Intel.  And this gives them the ability to take easy, cheap, sloppy routes for chip development, while also hurting the consumer by trying to prevent a product like the Ion 2 from making its way to netbooks.  Plain and simple like the early 2000s: a complacent Intel is a bad Intel.