Word has it that Qualcomm and its partners are working on a new device set to throw the netbook industry a curveball – the ‘smartbook’, which manufacturers plan to market as a smartphone/laptop companion. The tactic has been used before unsuccessfully by such companies as Palm, but Qualcomm is sure that consumers will have room in their hearts (and their wallets) for a smartbook.

They look like a Vaio P or Viliv S7, or even some kind of MID. They’re naturally going to run on a Snapdragon, which is awesome, but will use a 1 GHz CPU.

But that doesn’t mean they’re handicapped. The Snapdragon smartbooks will have 8-10 hour batteries, WWAN, Wi-Fi, GPS, HD vido encoding and Bluetooth. Resolutions are expected to run as high as 1280 x 768, which should beautifully display the 3D graphics the CPU is known for. 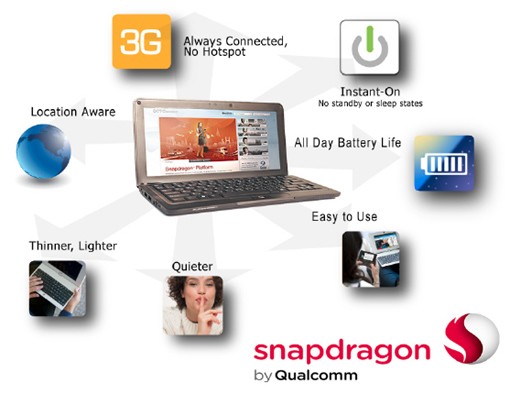 How about software? Engadget reports that Linux or a Linux derivative will be involved, with a UI based on some kind of quickboot functionality. If I had to guess, I’d push Moblin 2.0 as a possible candidate, but for now nobody knows for sure.

So why aren’t these just Snapdragon-based MIDs? You can’t quite tell by the photo, but these screens are expected at 10- to 12-inches. Their QWERTY keyboards won’t be full size, but will definitely be big.

“Acer, Compal, Samsung, ASUS, LG, Toshiba [and] Wistron” have been named as possible smartbook manufacturers, and the first devices are expected by the end of this year. Qualcomm was silent about price, but pricing will definitely determine the fate of the supposed new category.

It looks like TheRegister’s flowchart needs another node. Check back soon for more on the Qualcomm smartbook!