070 Shake shares the new song “Body” featuring Christine and the Queens, produced by David Andrew Sitek and Mike Dean, who also mixed and mastered the track from her highly-anticipated sophomore album YOU CAN’T KILL ME, due June 3rd via G.O.O.D. Music/Def Jam Recordings. Check out “Body” feat. Christine and the queens now.

For a glimpse into how electric her YOU CAN’T KILL ME Tour has been, 070 Shake recently shared a live video of “The Pines” recorded earlier this month at the House of Blues in Chicago.

“Body” follows the release of “Web,” which arrived with visuals created by C.O.R.E, and the first offering from YOU CAN’T KILL ME “Skin and Bones.” 070 Shake recently joined Zane Lowe for an interview on Apple Music 1 to speak about YOU CAN’T KILL ME.

070 Shake is currently on her headline North American tour, which launched earlier this month in Detroit, with many dates already sold out or low on tickets. The 20-date run sees stops in Chicago, New York City, Toronto, Houston, and Phoenix with support from Jonah Lenox as support at select dates. The tour will wrap with four shows in Los Angeles this June, two of which are sold out. Tickets available HERE.

In 2020, 070 Shake released her celebrated debut album Modus Vivendi, which Pitchfork described as “a refreshingly new take on eclectic, lovesick soul music” and includes the stand-out tracks “Guilty Conscience,” “Morrow” and “Under The Moon.”

Last year, she released multiple collaborative singles including the GENER8ION team-up “Neo Surf,” which arrived with cinematic visuals directed by Romain Gavras and “Lose My Cool” featuring NLE Choppa. Earlier this year, Shake was recruited by Madonna for a remix of her iconic track “Frozen.”

Check out “Body” above, see full tour routing and album details below and stay tuned for more from 070 Shake coming soon. You can’t kill me due june 3rd via g.O.O.D. Music / def jam recordings . Listen here 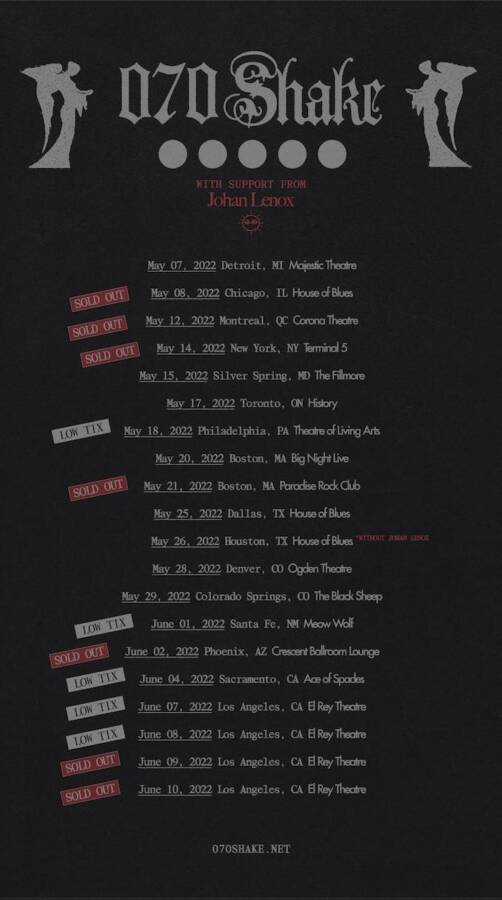 Tags
070 Shake
Thato Siyabonga Send an email 20 May 2022
Back to top button
Close
We use cookies on our website to give you the most relevant experience by remembering your preferences and repeat visits. By clicking “Accept All”, you consent to the use of ALL the cookies. However, you may visit "Cookie Settings" to provide a controlled consent.
Cookie SettingsAccept All
Manage Privacy