2 Chains belief in and dependence on God may be accentuated in an imminent body of work titled “So Help Me God.”

The American rapper and songwriter announced the upcoming album on his Twitter page yesterday 17 August 2020. According to him, the album drops 25 September. He didn’t give the time, but we expect the album to be out before 12 noon that day.

Is the adoption of the title “So Help Me God” merely coincidence? Back in 2015, Kanye West had announced his follow-up album to “Yeezus” would be “So Help Me God.” But he failed to use the title, preferring “The Life Of Pablo” instead… Now ‘Ye is promoting 2 Chainz’s imminent “So Help Me God”album on Twitter. 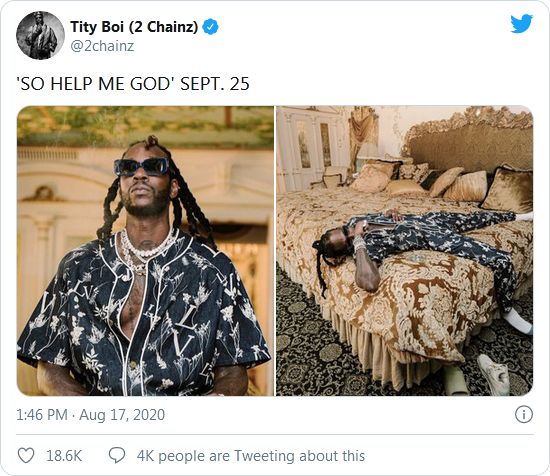 The announcement of the imminence of “So Help Me God” follows 2 Chainz’s Verzuz battle with another rap veteran, Rick Ross.

By the way, 2 Chainz has not given the tracklist for his upcoming project. Anyway, we are out here watching the clock and might share the album with you on release. You might want to subscribe to our newsfeed and follow our social media pages so you don’t miss out on what is coming.

Well, what do you think? You may drop your thoughts in the comment section below.