Mzansi rapper K.O has got big plans for the New Year, and fans may want to look out for him keeping all the musical promises he’s made so far – this year.

This much should be obvious from the recent conversation the songster had with some of his fans.

Apparently, the songster would have released a new album earlier, but the coronavirus made him defer his plans. According to him, speaking to one of his fans, he wouldn’t put out an album if he couldn’t create a tour around the project.

And with the restrictions previously in place, there was no way he could have gone on tour to promote the project. But that’ll soon be in the past. You can check out his tweet below. 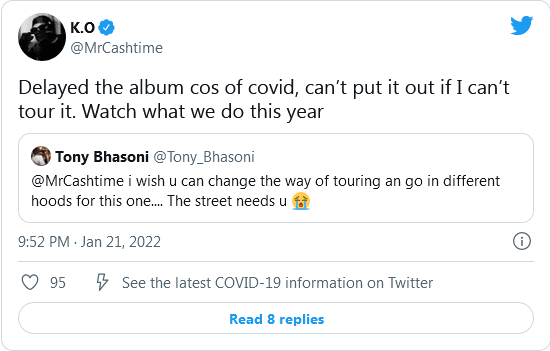 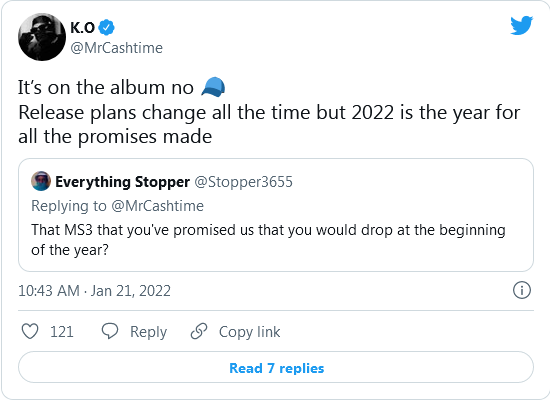 To a fan who had wondered about a particular song the “Lucky Star” had promised to drop at the beginning of this year, K.O had noted that the number will be part f the imminent project.

Of course, according to him, plans change all the time, but then, this year, he’ll be keeping all the promises he has made. So y’all might want to keep your eyes peeled for that K.O album. Stay tuned for updates.

Tags
K.O
John Israel A Send an email 25 January 2022
Back to top button
Close
We use cookies on our website to give you the most relevant experience by remembering your preferences and repeat visits. By clicking “Accept All”, you consent to the use of ALL the cookies. However, you may visit "Cookie Settings" to provide a controlled consent.
Cookie SettingsAccept All
Manage Privacy