The 2023 Super Bowl will go live soon, and during halftime, your bad gal Riri will perform a show for the benefit of those who made it to the event. She’s the headliner and has confirmed her performance already.

The celebrated singer was rather laconic in passing the message of her imminent performance. In a post on her verified Instagram page, she merely shared a picture of her holding the NFL ball. There was no caption to the post whatsoever.

But the message was clear enough, and fans were jubilant about the acknowledgement of her performance on the platform, where she has over 135 million followers. At the time of writing, the post has been liked over 5.5 million times. It also had thousands of comments. 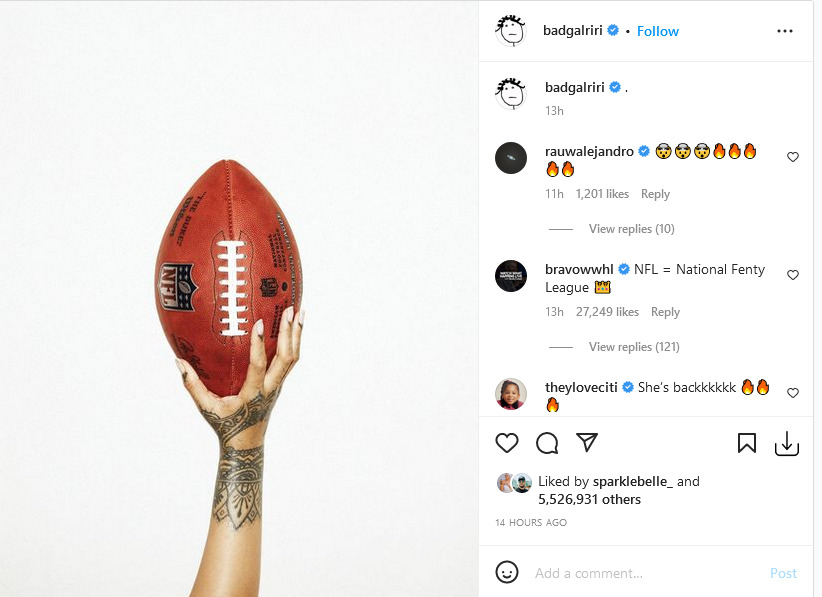 Rihanna has not released anything for a while. So fans have been lapping up whatever she decides to get involved in, from shows to musical appearances. The Barbadian singer recently gave birth – her very first. And for those who might want to know, she’s made it clear she’s a tigress when it comes to protecting her child.

Tags
Barbados Rihanna USA
John Israel A Send an email 26 September 2022
Back to top button
Close
We use cookies on our website to give you the most relevant experience by remembering your preferences and repeat visits. By clicking “Accept All”, you consent to the use of ALL the cookies. However, you may visit "Cookie Settings" to provide a controlled consent.
Cookie SettingsAccept All
Manage Privacy