Life, as well as business, is a game of interest. People endorse what provides value to them and encourage their dreams, plans, business, ambitions – you name it.

50Cent had rejected Donald trump previously and even declined attending the president’s inauguration in 2016. However, after seeing Joe Biden’s tax plan, 50Cent has raised his hand, flying a Trump flag.

Joe Biden is another presidential candidate in this year’s elections. Biden is proposing taxes of between 58 and 62 per cent for Americans earning about 400k a year. 50Cent shared a clip of the tax plan, showing just how repellent it was to him. He threw the f-word lavishly in the clip which you can check out below. 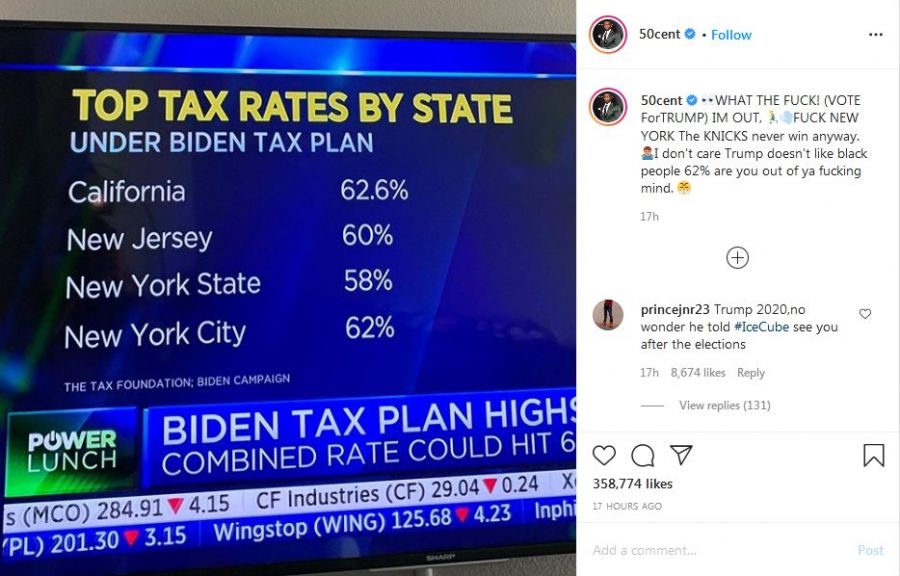 Some have criticized him for his stand on Trump’s reelection. But the songster could not be bothered. He even joked later that he was broke and asked for peeps to lend him some money.

Have you got some dollars to spare? You might want to fork it over to 50cent or else join us for a good laugh over a “broke” 50Cent.

Tags
50 Cent
John Israel A Send an email 20 October 2020
Back to top button
Close
We use cookies on our website to give you the most relevant experience by remembering your preferences and repeat visits. By clicking “Accept All”, you consent to the use of ALL the cookies. However, you may visit "Cookie Settings" to provide a controlled consent.
Cookie SettingsAccept All
Manage Privacy