The American rapper 50 Cents and The game’s feud will soon become game for television. The man behind it all is 50 Cent himself. The champ is fast becoming a grand figure on American TV.

Taking to Twitter yesterday 14 September 2020, 50 Cent announced that he had to do it – create a series around his beef with The Game for television. The TV series will be part of Starz. You can check out the champ’s post below. 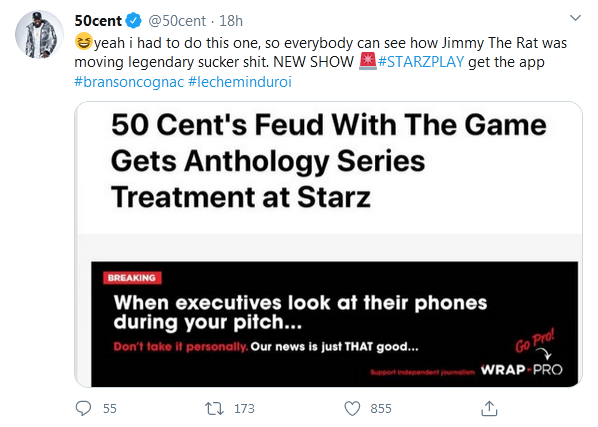 Clearly, from th responses to his tweet, fans are pretty excited about what is on the way. It has been reported that the first season will explore the 2005 row between 50 Cent and The Game. The row led to the conviction of Jimmy Henchman (James Rosemond). He’s a lifer right now.

50 Cent will be the writer and executive producer of the series alongside BET’s Abdul Williams. He might be keen about revisiting his feud with The Game, but the former G-Unit rapper is uninterested in creating anything about the group with which he became famous. He would rather forget the band which had Lloyd Banks and Tony Yayo as members.

Well, fans will be looking forward to the series. We might bring it to you here on UbeToo when it drops.