For American rapper 50 Cent fans, there is something new in the bag, and the songster himself has scheduled a date for its official release.

The celebrated musician’s BMF programming announced via its official Twitter channel that a documentary on the infamous crime family would be coming to STARZ. If all goes well, The BMF Documentary: Blowing Money Fast will premiere as early as October 23.

From the caption to the post, fans should expect to see the mafia in word and story, blowing money fast. You can check out the tweet below. 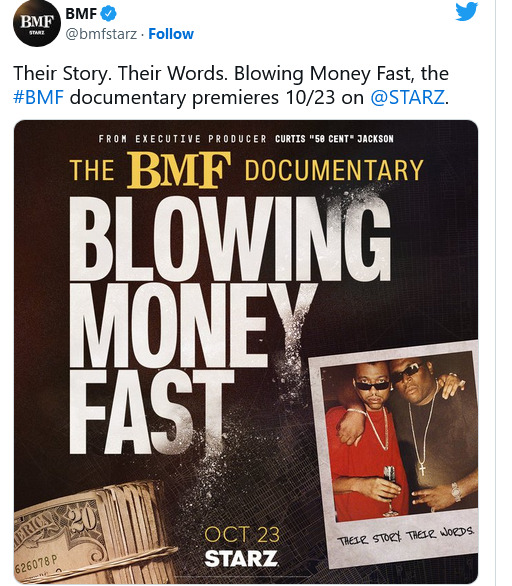 BMF is the acronym for Black Mafia Family. It is also the prelude to the latest flick, which has Fif as an executive producer.

The BMF Documentary: Blowing Money Fast was originally announced last November as an eight-episode series. Along the line, though, it was condensed into a single film. But, of course, that decision had its fans and those who were pissed about it. To each his faction, apparently.

50 Cent’s switch from rap to producing flicks has been of great interest to fans. And the questions as to how he was able to pull this off have not been in short supply. The G-Unit ace’s success with STARZ is especially pronounced.

Tags
50 Cent USA
John Israel A Send an email 6 October 2022
Back to top button
Close
We use cookies on our website to give you the most relevant experience by remembering your preferences and repeat visits. By clicking “Accept All”, you consent to the use of ALL the cookies. However, you may visit "Cookie Settings" to provide a controlled consent.
Cookie SettingsAccept All
Manage Privacy