6ix9ine’s propensity for laughing at adversaries who are already down played out again recently after it was reported that Lil Tjay was shot and required emergency surgery.

DJ Akademiks had shared the news of the rapper’s hospitalization on Instagram, and 6ix9ine’showed up in the comments with a laughing emoji, followed by a crying one.

So far, the focus has been on the laughing emoji, which many think is completely insensitive. But then, as some have noted, that’s not strange for 6ix9ine, who’s justly infamous for his many wars, as well as for his habit of kicking his adversaries when they are down. 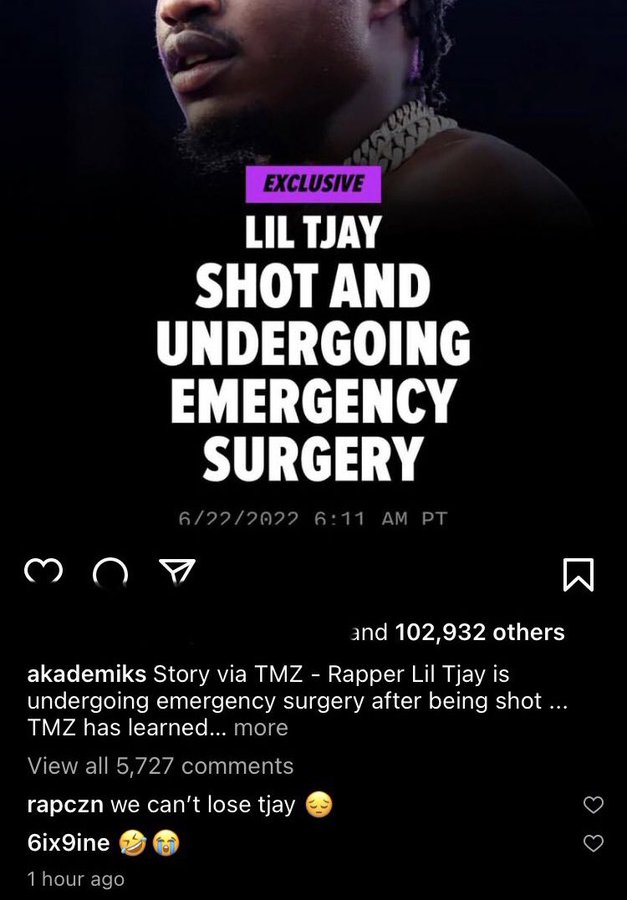 Interestingly, unknown to 6ix9ine, at the time he mocked Lil Tjay, the rapper was already out of the hospital and recuperating. The two rappers have a longstanding beef that only appears to have gotten worse with 6ix9ine’s mordant outburst on Instagram.

While 6ix9ine is easy to go on mocking sprees against his supposed adversaries, he’s also known to be remarkably generous to those who are poor and struggling to make ends up. But then, as one social media user had noted, it doesn’t excuse his behaviour toward Lil Tjay.

It’ll be interesting to see how Lil Tjay will respond – if at all.

Tags
6ix9ine USA
John Israel A Send an email 23 June 2022
Back to top button
Close
We use cookies on our website to give you the most relevant experience by remembering your preferences and repeat visits. By clicking “Accept All”, you consent to the use of ALL the cookies. However, you may visit "Cookie Settings" to provide a controlled consent.
Cookie SettingsAccept All
Manage Privacy