A debate has reputed in Mzansi over who, between Sjava and big Zulu, is the better storyteller. Both are notable musicians who somehow manage to weave storytelling into their music.

A Twitter user actually started the debate. The user had drawn up a list of those he considers the best musical storytellers in South Africa, including Zakwe, Duncan, Sjava and Big Zulu.

The debate was fierce. Along the line, though, Zakwe and Duncan apparently lost their places in the list, leaving just Big Zulu and Sjava for earn the tag of best storyteller from the Twitteriat. 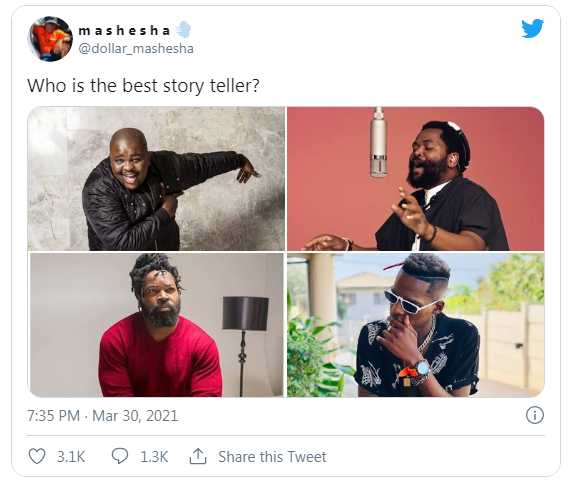 The overwhelming verdict is that Sjava is the best of the pack – the best musical storyteller out there. But then, since the debate is still on, one can’t tell if things might swing in Big Zulu’s favour soon.

By the way, both Sjava and Big Zulu have gifted South Africa highly relatable music. Last year, Big Zulu charmed the nation with a song titled “Mali Eningi,” featuring Riky Rick and Intaba YaseDubai. It was an instant hit that earned Big Zulu Song of the Year Nominations

Well, who do you think is a better storyteller? Big Zulu or Sjava? You’re welcome to join the conversation by dropping your thoughts  in the comment section below.