Flvme is one South African rapper confident in his gift and unafraid to think and declare his artistic superiority to another artiste – in this case Emtee.

Not long ago, Emtee had tweeted asking his fans to name a South African artiste who makes better hooks that him. There was a consensus among his fans that the Ambitiouz Entertainment duo Blaq Diamond is the answer.

To Emtee’s question the “Candy Man” of South African music, Flvme, had responded that he doesn’t have anything against Emtee but that he doesn’t believe Emtee is a better artiste than him.

Flvme’s response provoked Emtee to reply. Emtee made it clear in his response that he wasn’t competing with anyone by asking his fans a question, and Flvme ought to have just walked and not disregard his creativity.

But Flvme wasn’t resting after his first shot. In response to Emtee, Flvme had claimed that the Emtee Records’s boss last released a hit in 2017. Will this provoke a rap feud? We can’t tell. But you wanna stay tuned, anyway. 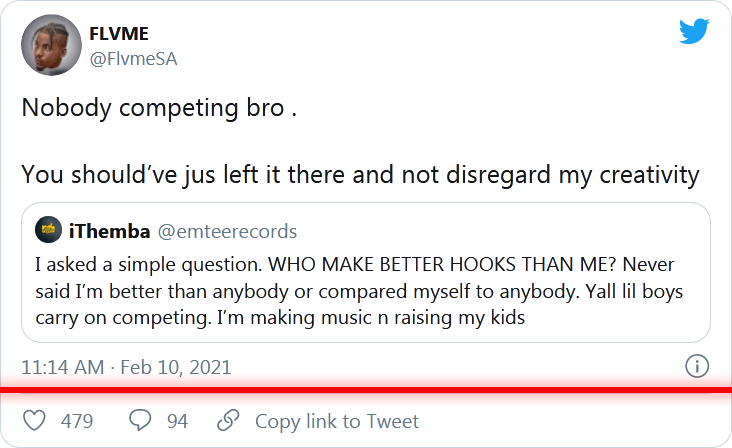 Well, between the two rappers, who do you think is superior? Why? You’re welcome to join the conversation by dropping your thoughts in the comment section below.

Tags
Emtee Flvme
John Israel A Send an email 11 February 2021
Back to top button
Close
We use cookies on our website to give you the most relevant experience by remembering your preferences and repeat visits. By clicking “Accept All”, you consent to the use of ALL the cookies. However, you may visit "Cookie Settings" to provide a controlled consent.
Cookie SettingsAccept All
Manage Privacy