He’s a bloke for weed, like the American poker player and international playboy, and he’s just taken a stand in celebration and defense of weed.

Never one to post regularly on social media, the songster, who’s also known as The Boy Doing Things and Reece Youngking, recently tweeted that marijuana should be legalized in South Africa.

But that’s not the first time the songster would say something about weed. Back in 2016, he admitted he’s been smoking weed because he’s always with his friends. 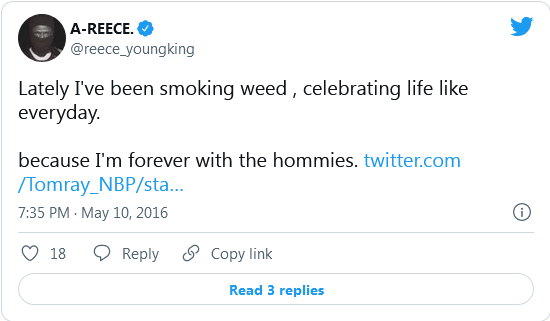 Years later, in 2021, he’d made a roll call of the “weed heroes” of South Africa, pointing out that peeps have not really smoked until they have shared joints with the likes of the disc jockeys and producers DJ Maphorisa and PH and the rappers Emtee and Wordz.

A-Reece’s post elicited mixed reactions, with some Twitter users supporting him and others asking him to focus on the music and leave the weed alone.

Either way, he’s made his point, and it’s up to the government to lap it up or take a leak on it. Stay tuned for what follows.

Tags
A-Reece
John Israel A Send an email 8 February 2022
Back to top button
Close
We use cookies on our website to give you the most relevant experience by remembering your preferences and repeat visits. By clicking “Accept All”, you consent to the use of ALL the cookies. However, you may visit "Cookie Settings" to provide a controlled consent.
Cookie SettingsAccept All
Manage Privacy