South Africa’s A-Reece and Emtee have been nominated for the Global Music Awards Africa.

The two rappers, who are best described as rivals, were nominated in the Hip Hop Artist of the Year category alongside Kwes Arthur and Sarkodie of Ghana and Ladiopoe of Nigeria.

Emtee, who currently runs a record label of his own following his acrimonious exit from AMbtiouZ entertainment, is pleased about and grateful for the nomination. In a post to Instagram, he’d shared the flier of the category in which he was nominated, thanking those who made it possible. 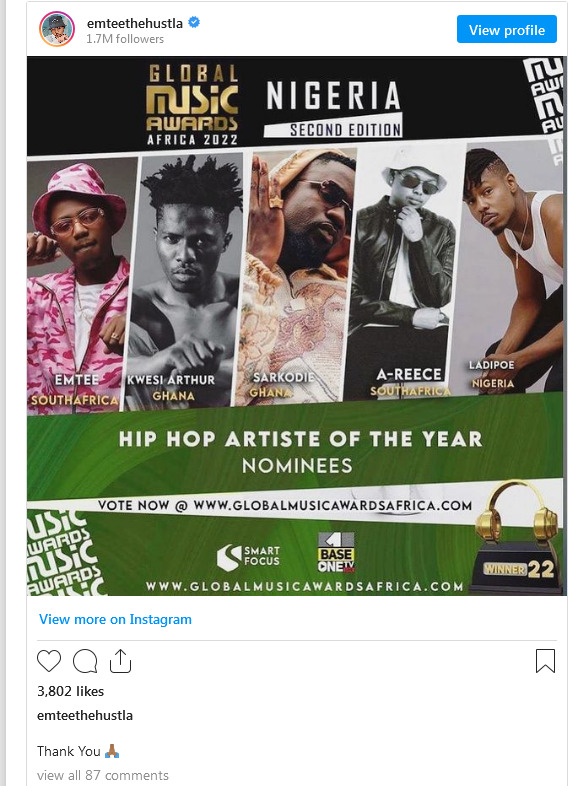 In contrast, A-Reece has said nothing about his nomination. His last post  (at the time of writing) shows him standing in what appears to be a stage with two “ghosts” behind him.

The Global Music Awards Africa is a Nigeria award currently in its second year. Nominations for the award are in several categories, including gospel Song of the Year, DJ of the Year, Group of the Year, Producer of the Year, and Female Artist of the Year.

Will one of the South Africans snap the Hip Hop Artist of the Year? Or will one of the Ghanaians take home the award? The coming days will reveal a lot. Stay tuned, y’all.

Tags
Emtee Nasty C
John Israel A Send an email 26 January 2022
Back to top button
Close
We use cookies on our website to give you the most relevant experience by remembering your preferences and repeat visits. By clicking “Accept All”, you consent to the use of ALL the cookies. However, you may visit "Cookie Settings" to provide a controlled consent.
Cookie SettingsAccept All
Manage Privacy