Your Boy Doing Things A-Reece is gearing to release his album “Paradise 2.” In the interim, he has released a song, titled “Strictly for my Bitch,” from the compilation.

It was his first release of 2021 and fans were ecstatic about the song, urging him to ramp up things and give them “Paradise 2.”

A-Reece had to clarify that indeed “Paradise 2” was on the way. The song he has just released is something for fans to assuage their hunger while he completes the project, which is already in post production. You can check out the post below. 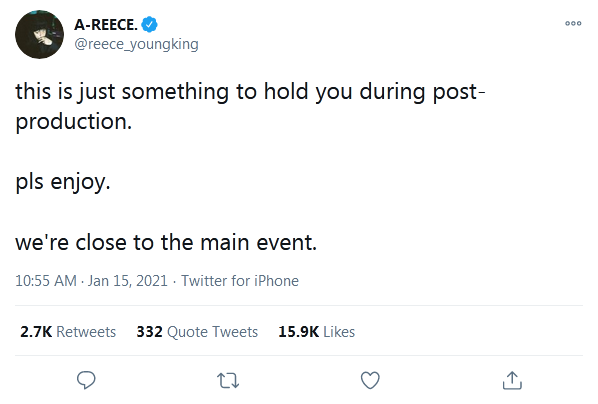 Are you looking forward to “Paradise 2” like most of A-Reece’s fans? Why or what not? By the way, we’re following events keenly and will share the album with you on release. In order not to miss out, you might want to follow our social media channels as well as subscribe to our newsfeed.

On release, “Paradise 2” will be a follow-up to “Paradise,” a project he released in 2016, when he was signed to Ambitiouz Entertainment. He has long left the label and is doing things his one way as an indie artiste.

A-Reece was nominated for the MTV Africa Music Awards (MAMA) and his fans are determined he should win.