Load shedding is one subject that has been on the front burner in South Africa for a long time, with celebrities and ordinary folks alike sharing their thoughts on it. The latest celeb to contribute to the load shedding debate is Sonia Mbele.

In a recent tweet, she had ranted about the power situation in the country, asking her compatriots to explain to her why there was overnight load shedding, and even though she had to wake up very early for an unveiling, there was still no electricity.

She tagged South Africa’s current president Cyril Ramaphosa in the tweet, using the “f” word to demand why there was no electricity.

Of course, the President was not there to respond to her. Instead, South Africans thronged the comments, with some stating that they are facing the same challenges as the media personality. Some even joked about the situation, urging her to call the municipal authorities. You can check out the tweet below. 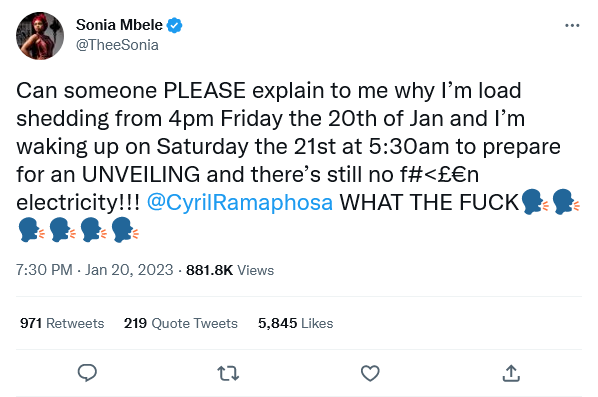 Amid her rant, South Africa’s power utility Eskom had dropped a morbid verdict through its spokesperson: The load shedding ish might drag into the next two years. So, South Africans just have to prepare for what might follow. It is certainly not yet uhuru.

Tags
Sonia Mbele
John Israel A23 January 2023
Back to top button
Close
We use cookies on our website to give you the most relevant experience by remembering your preferences and repeat visits. By clicking “Accept All”, you consent to the use of ALL the cookies. However, you may visit "Cookie Settings" to provide a controlled consent.
Cookie SettingsAccept All
Manage Privacy