If you’re a fan of K-pop and the girl band Aespa, then you’re in for a piece of good news. The band will be performing at the Coachella festival this year.

Made up of Karina, Ningning, Winter, and Giselle, Aespa is famous for several memorable numbers, including “Black Mamba,” “Next Level,” and “Savage.”

Excited about their upcoming appearance, Aespa had happily announced it on Twitter via their verified handle, noting they’re the first K-pop girl band to perform in what they called “America’s biggest music festival.” 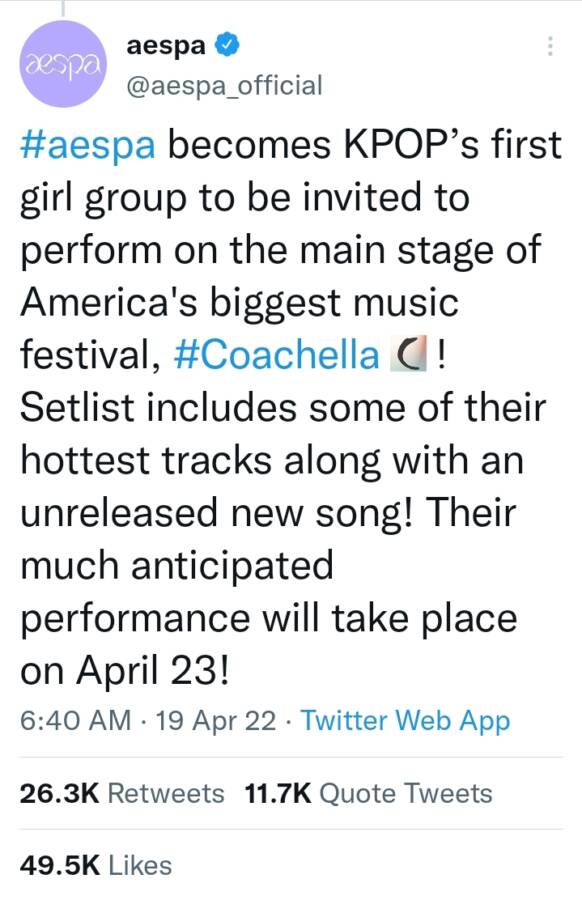 During their set, they’re expected to croon some of their well-known songs, as we as an unreleased song from their kitty.

An annual music festival, Coachella holds each year in Indio, California, featuring musicians from around the world. Expectations are pretty high for this year’s event, with Aespa expected to thrill guests to their heart’s content.

How magically they make their debut is what fans are looking forward to. Until then, follow us and stay tuned.

Tags
Aespa South Korea
John Israel A Send an email 19 April 2022
Back to top button
Close
We use cookies on our website to give you the most relevant experience by remembering your preferences and repeat visits. By clicking “Accept All”, you consent to the use of ALL the cookies. However, you may visit "Cookie Settings" to provide a controlled consent.
Cookie SettingsAccept All
Manage Privacy