After four productive years at Kaya FM, Mzansi rapper and radio presenter Proverb has reportedly taken a bow from the radio station.

Media personality Phil Mphela broke the news. But Proverb himself is yet to say anything about his exit from the radio station. 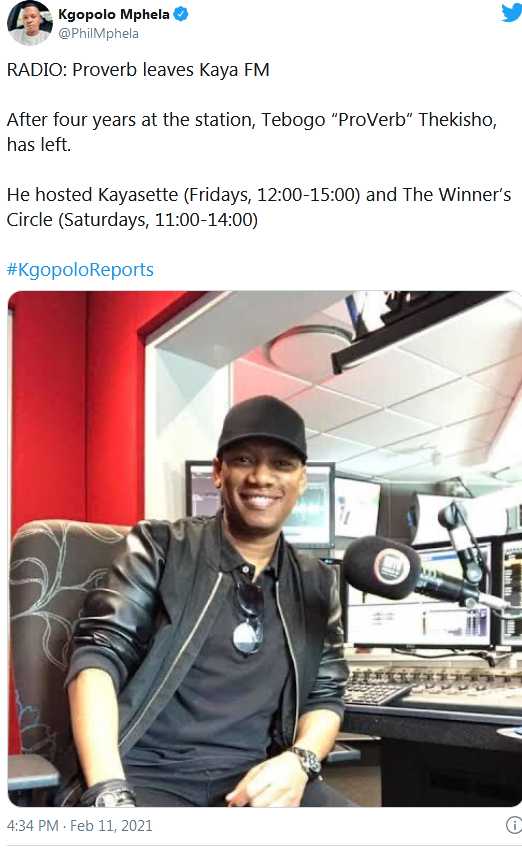 Last year, the songster was elected to the board od the South African Musical Rights Organization (SAMRO). He had stated back then that he would use his position to advice the culture and has been doing just that.

It is unknown if his reported exit from Kaya FM was so that he can focus on his duties at SAMRO. Well, until he makes a formal announcement, one can only watch and wait.

Although a musician, Proverb is better known as a radio host. He used to be the host of Kayasette every Friday from 12noon to 3pm and The Winners Circle from 11am to 2pm.

The report of his exit from Kaya FM is currently generating mixed reactions online. While some say they would miss him on set, others merely wished him the vest going forward.

What do you think of Proverb leaving Kaya FM after four years? You’re welcome to join the conversation by dropping your thoughts in the comment section below.

Tags
Proverb
John Israel A Send an email 12 February 2021
Back to top button
Close
We use cookies on our website to give you the most relevant experience by remembering your preferences and repeat visits. By clicking “Accept All”, you consent to the use of ALL the cookies. However, you may visit "Cookie Settings" to provide a controlled consent.
Cookie SettingsAccept All
Manage Privacy