South African music producer Oscar Mbo has indirectly admitted he took money from a music producer but refused to show up for the show he was contracted to perform at.

According to the music promoter, who recently raise hell on Twitter, Oscar Mbo has finally paid up the money he adamantly refused to pay initially.

Days ago, Deejay Archie SA had taken to Twitter to announce to the world that he paid thousands of rands to Oscar Mbo to perform at a gig, but the musician did not show up for the show and also refused to refund the money paid.

The post encouraged others to come out as well, making similar claims. Things got so heated that Oscar Mbo started trending on Mzansi Twitter, with many calling him a scam.

Amid the critical heat, oscar Mbo had deactivated his Twitter account. But the damage had already been done.

In a new twist to the story, Archie had shared a screenshot showing that Oscar Mbo has refunded the sum. 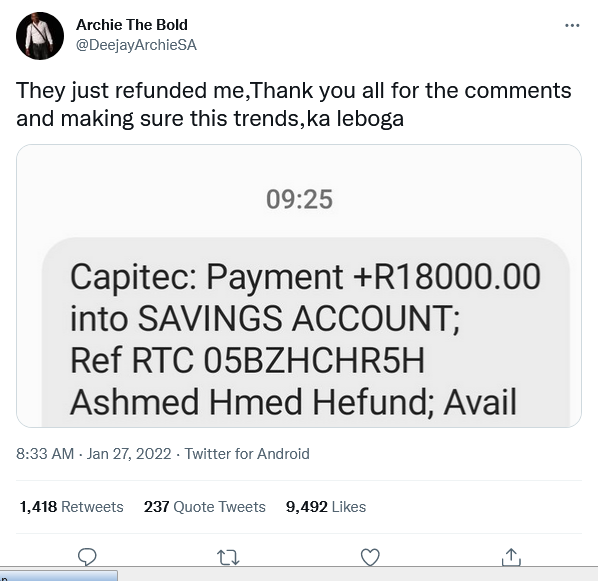 While the reported refund had calmed down some social media users, others mocked Oscar Mbo for having to wait until he was called out and disgraced publicly before returning the money. Inside life.

Tags
Oscar Mbo
John Israel A Send an email 29 January 2022
Back to top button
Close
We use cookies on our website to give you the most relevant experience by remembering your preferences and repeat visits. By clicking “Accept All”, you consent to the use of ALL the cookies. However, you may visit "Cookie Settings" to provide a controlled consent.
Cookie SettingsAccept All
Manage Privacy