DJ Sumbody has reportedly asked Cassper Nyovest to pay him the sum of R147k over the use of their song in a Samsung ad.

Cassper Nyovest is a brand ambassador for Samsung, and the brand had reportedly used the duo’s collaborative song “Remote Control” on their ad without the permission of DJ Sumbody.

Allegedly DJ had wanted to sue, but Cassper Nyovest had talked him out of it as it would lead to the termination of his endorsement deal with the brand. DJ Sumbody had allegedly been asked to wait until the deal sails through, and then Cassper would settle him.

Again, allegedly, he had failed to settle DJ Sumbody, leading to a little crisis between them. However, when the story first broke out last year, 2021, as reported by City Press, Cassper had denied the whole claim, accusing the media of using his name for clout and relevance. 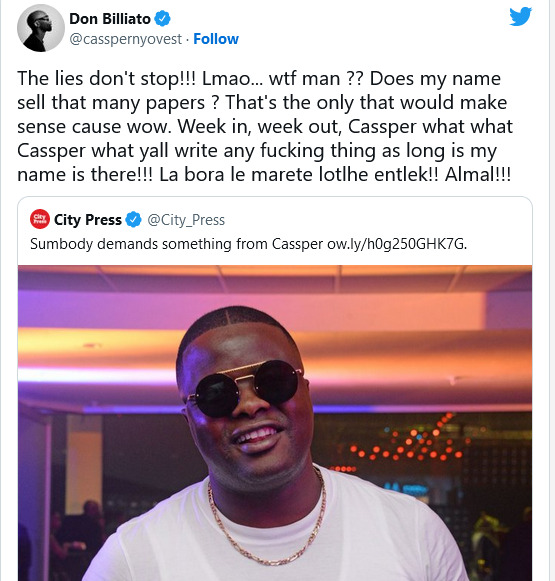 It’s been a year since he made that comment. So, it’s interesting that the case should resurrect again like it wasn’t a subject of conversation the year before. 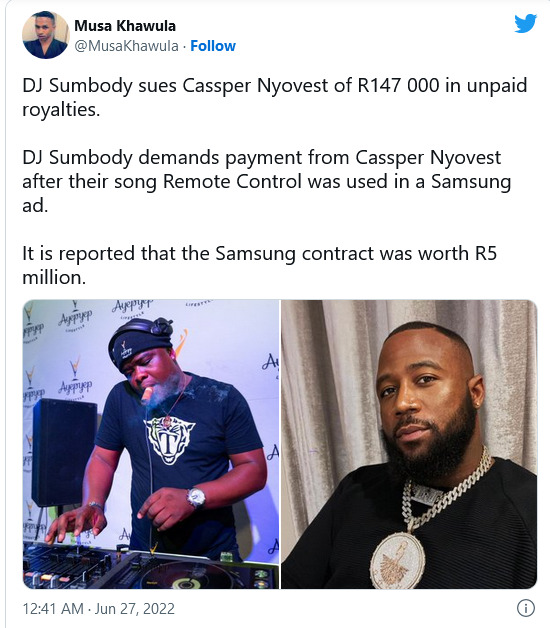 But how would Cassper Nyovest handle it this time? We’re following events keenly and will bring you more details as they drop. So follow us and stay tuned.

Tags
Cassper Nyovest DJ Sumbody
John Israel A Send an email 28 June 2022
Back to top button
Close
We use cookies on our website to give you the most relevant experience by remembering your preferences and repeat visits. By clicking “Accept All”, you consent to the use of ALL the cookies. However, you may visit "Cookie Settings" to provide a controlled consent.
Cookie SettingsAccept All
Manage Privacy