Mzansi rapper, AKA has always spoken his mind for as long as we’ve known him. He has always shared his honest opinion about various issues on social media. This time around, he’s reacting to the newly adjusted budget for the Zulu Royal Household to R71m.

It was recently revealed that the KZN provincial government had increased the annual budget for King Goodwill Zwelithini to R71m. The news prompted a lot of mixed reactions on social media. Reacting to the news, a social media user suggested that the money should have been used to improve the province, especially the rural areas.

This prompted an affirmative response from Supa Mega who later tweeted about the people of Zulu not being bothered by it at all. In his opinion, “their king is their king”. 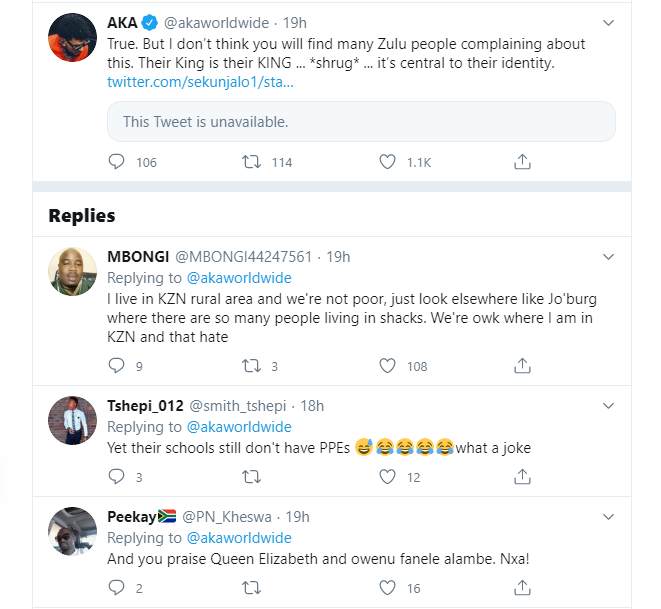 The annual budget is used for cultural programmes which are headed by the royal house and not his salary.

Tags
AKA
John Jabulani Send an email 4 June 2020
Back to top button
Close
We use cookies on our website to give you the most relevant experience by remembering your preferences and repeat visits. By clicking “Accept All”, you consent to the use of ALL the cookies. However, you may visit "Cookie Settings" to provide a controlled consent.
Cookie SettingsAccept All
Manage Privacy